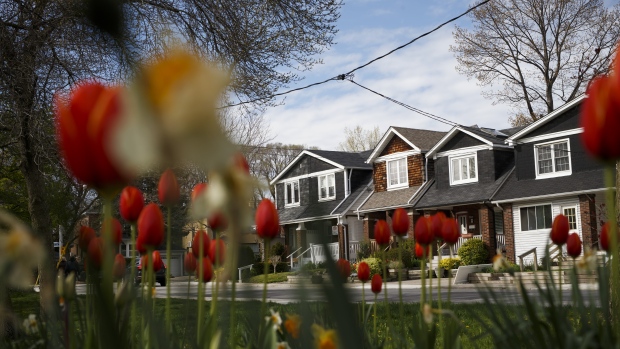 Tulips stand in front of houses in Toronto, Ontario, Canada, on Thursday, May 11, 2017. , Bloomberg News

Canada Mortgage and Housing Corp. acknowledged a lack of diversity in its ranks and its role in past acts of racism on Friday as it pledged to overhaul how it does business.

The federal housing agency said it will re-assess all of its practices through a racialized lens to an effort to eliminate discrimination.

It also used the statement to acknowledge its role in funding the forced resettlement of Black people, most notably from Halifax's historic Africville and Hogan's Alley in Vancouver.

CMHC's decision was prompted by anti-Black racism demonstrations held across Canada and the U.S. after the death of George Floyd, a handcuffed Black man in Minneapolis who pleaded for air as a white police officer pressed his knee against Floyd's neck for nearly nine minutes.

"We haven't done nearly enough. CMHC must set a high standard," the agency said in a statement.

"We must all stand together with our Black co-workers and the victims of murder, oppression and the systemic racism that exists everywhere."

"At CMHC, we would once have congratulated ourselves for our diversity," CMHC said.

"This is however no achievement when too few of our people leaders are Black or Indigenous -- none among senior management. And diversity isn't enough: it's where we start."

Kike Ojo-Thompson, who runs diversity, inclusion and equity consultancy Kojo Institute, said CMHC's statement seemed like it was written in the voice of someone who really understands the moment the country had been plunged into.

She found it interesting that CMHC was so forthcoming with data around their Black and Indigenous employees, "particularly because their numbers are so low."

"The first step to an accountability framework and accountability approach is to actually show your data, so that you as well as the community can know what the target is," she said. "If you're low, we know you've got to get from zero to three, or three to five, and we're not going to expect 10 tomorrow... so exposing the data is very helpful."

Among the measures announced Friday, CMHC said it will create specific targets for adding Black and racialized people to its leadership and senior management ranks.

It will offer leadership training and professional development to support the progress of Black and racialized employees and provide mandatory anti-racism training for all staff.

People with lived experience of racism will now be involved in a re-assessment of CMHC's recruiting, evaluation and promotion processes and its diversity and inclusion efforts.

"We reject racism, white supremacy and wish to atone for our past racism and insensitivity," CMHC said.

"Racism has been built up and reinforced for centuries, whether against Black, Indigenous people or people of colour. Only a sustained and focused effort will eliminate it."

Ojo-Thompson said there were some measures missing from the statement.

She would have liked to see CMHC mention an external advisory body.

Such a group must be external, she said, because it offers protection and accountability in organizations that may otherwise punish people who speak out.

She also wanted more clarity around who exactly came up with the new policies and promises CMHC made and how much flexibility they offer if people suggest further ideas.

"What you've told me is, 'This is what I'm going to do,' so my question is, 'If I say that there's something missing, will you do that or is this all?"'