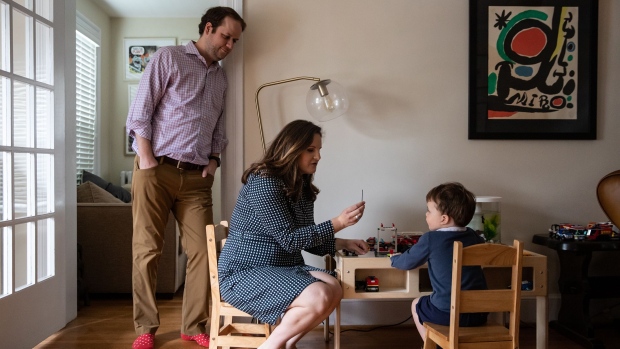 Women helped pull the U.S. economy out of the last recession. This time around they are falling behind.

The pandemic is disproportionately affecting women and threatening to wipe out decades of their economic progress. As the crisis drags on, some of the biggest pain points are among women of color and those with young children.

These setbacks -- characterized by some economists as the nation’s first female recession -- stand in sharp contrast to the dramatic progress women made in the expansion following the last financial crisis. The jobs, income and promotions that women lose as a result of the coronavirus could hold back economic growth and sideline an entire generation of women.

The official data are stark. The unemployment rate for Black and Hispanic adult women remains above 10 per cent, even though it’s decreased to 7.3 per cent for White women, according to data from the Labor Department -- which will report September employment figures Friday.

At the same time, women between the ages of 25 and 54 -- also known as prime-age -- are increasingly dropping out of the workforce, often to care for children. The participation gap between men and women in this age group is now widening after shrinking to the narrowest ever right before the virus.

Nancy Weindruch, 36, is a case in point. She left her job in communications in July to care for her two-year-old son, while her husband kept his higher-paying work as a political consultant. Earlier in the pandemic, she took advantage of a government program that provided paid leave but that has since expired. She hopes the situation is temporary.

“I’m determined to return to the workforce,” said Weindruch, even if that means “starting a few steps behind.”

Economists say it’s going to be difficult for women like Weindruch to return, and there could be long-lasting consequences not just for women but the entire economy.

Federal Reserve Chair Jerome Powell has commented repeatedly about how women and minorities have been among the hardest hit economically by the virus.

Millennial women, many of whom have children, were “blazing trails” before the pandemic and are now falling behind, which is a “painful setback,” Coronado said.The female recession could slow the recovery, according to some economists and policy analysts. The wage gap will likely be more than 2 percentage points wider after a pandemic recession, instead of shrinking like it would during a normal downturn, according to Northwestern University economics professor Matthias Doepke, who co-authored a recent study on the topic.

As many as tens of millions of women may never return to the labor force, even after a vaccine is found, said Center for American Progress senior policy analyst Rasheed Malik. Altogether, McKinsey & Co. expects global gross domestic product could be US$1 trillion less in 2030 than it would be without a gender unemployment gap.

There are political consequences too, as women represent one of the biggest voting blocs in question this election. Support for paid leave and similar policies is rising, particularly among Republicans.

Roughly 72 per cent of female voters polled in late March by the University of Maryland’s Program for Public Consultation were in favor of some type of paid leave, up from 64 per cent earlier in the month. The increase in support among men and women for such a policy was driven by a 10-percentage-point rise among Republicans.

Before the virus, women had been making major strides in the labor market and in closing the wage gap.

Participation among women age 25 to 54 peaked in 2000, then dipped after the financial crisis, only to begin accelerating again in 2015 until right before the pandemic. Women earned 82.3 cents of every dollar men did last year, up from 77.8 cents in 2007, Census data show.

At the start of the pandemic, women lost more jobs than men, particularly in industries like hospitality and other services with high female employment.

As states reopened, the female unemployment rate has improved, down from a peak of 15.5 per cent in April, the first double-digit reading on record. But at the same time, men’s jobless rate remains lower.

Job losses have been especially dire for women of color, whose unemployment rates had fallen closer to that of White women before the pandemic. Unemployment for Hispanic women surged to 20.2 per cent in April, compared with 4.9 per cent in February. Black women actually saw their worst jobless rate since the 1980s -- 16.5 per cent -- in May, even though other groups were beginning to see an improvement by that time.

That’s a reverse of what’s happened in prior recessions, according to Northwestern’s Doepke. Since job losses typically fall disproportionately on men in recessions, including the previous downturn, women can act as a “shock absorber” -- increasing hours or joining the labor force to offset the household’s income declines, Doepke said.

This time around, women are increasingly dropping out of the labor market altogether as more women are losing or quitting their jobs “because they realize that children come first,” San Francisco Fed President Mary Daly said in a virtual webinar earlier this month.

Nearly 7 million Americans aren’t employed because they have to take care of children, according to a Census survey earlier this month.

Since women earn less than men on average, it’s often the mother who steps back. Women lose valuable skills during the time they aren’t working, which can make finding a job in the future harder and damage family finances, according to Center for American Progress analyst Malik.

Flexibility at a Cost

The rise in remote work during the pandemic could boost women’s participation but at the same time may jeopardize promotion and pay prospects, said Wells Fargo & Co. senior economist Sarah House.

“Flexibility comes at a cost,” House said. “You’re not in the room.”

Finding childcare is poised to continue to be difficult as the industry itself has faced unprecedented challenges including closures and job losses, Malik said. Roughly 94 per cent of child day care industry jobs are held by women, Bureau of Labor Statistics data show.Although policy makers remain at a standstill in talks about more stimulus, House Democrats have proposed legislation that would help fund schools and childcare centers during the pandemic as well as give some parents temporary paid leave.

“We just cannot get out of this -- the hole that we’re in -- in any reasonable way, without doing huge scarring, without a much stronger care infrastructure,” said Heidi Shierholz, senior economist at the Economic Policy Institute.