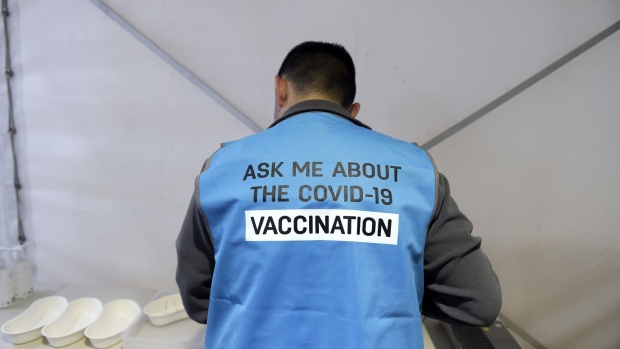 A pharmacist works at a drive-thru Covid-19 vaccination hub set up on the grounds of shutdown Bunnings Warehouse store in the Melton area of Melbourne, Australia, on Monday, Aug. 9, 2021. Australia continues its struggle to contain a delta outbreak across the nation's east coast, with the race to increase vaccinations now key to prospects for a reduction in virus restrictions. Photographer: Carla Gottgens/Bloomberg , Bloomberg

(Bloomberg) -- Australia’s government may face a more than A$50 million ($37 million) bill related to its Covid-19 vaccination program, as thousands of people register for compensation for health issues related to their inoculations, the Sydney Morning Herald reported.

More than 10,000 people have registered for a government program to be compensated for lost income after being hospitalized for rare but significant side effects from the jab, the paper reported, citing official data. Compensation starts from A$5,000, meaning the program would cost at least A$50 million should each claim be approved.

Australia’s Therapeutic Goods Administration has received almost 79,000 reports of adverse side effect from 36.8 million doses of vaccine, according to its website. The most frequent reported side effects include a sore arm, headache, fever and chills.

The TGA has received 288 reports assessed as likely to be heart inflammation linked to the Pfizer Inc. vaccine, as well as 160 of rare clotting disorder thrombosis with thrombocytopenia syndrome (TTS) linked to the AstraZeneca Plc vaccine. Nine deaths have been linked to the immunization program, the overwhelming majority of whom were aged 65 years and older, according to the TGA.

Following an early setback, Australia ramped-up its vaccination push in the second half of the year as the delta variant plunged its two largest cities Sydney and Melbourne into a months-long lockdown. Restrictions have gradually eased in recent weeks as inoculation rates have surged.