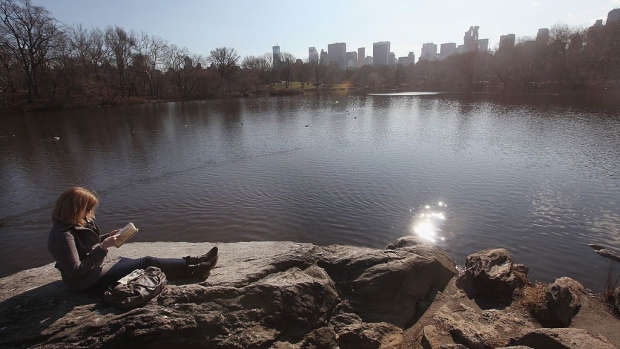 (Bloomberg Opinion) -- Thanksgiving is behind us, Christmas is around the corner and the rest of the long, dark winter lies ahead -- and that means peak reading season is upon us.So here are a few books I will read, or at least start. What attracted me to these books is how they approach thinking about thinking: Each tries to tease out why our general understanding on a subject is so often wrong; they explore better cognitive frameworks that could help us comprehend issues more clearly; they consider unique perspectives in securities trading, national security, genetics and artificial intelligence.

On to the reading:

No. 1. "Behave: The Biology of Humans at Our Best and Worst" by Robert M. Sapolsky.

The professor of biology and neurological sciences at Stanford University (and a MacArthur Fellowship winner in 1987) takes a deep examination into the most basic question of human behavior: Why do we do the things we do?

He probes the things that influence and determine behavior: neurology, endocrinology, structural development of the nervous system, culture, ecology and the millions of years of evolution. Why we do what we do turns out to be even more complicated than you might have imagined.

No. 2. "The Mosquito: A Human History of Our Deadliest Predator" by Timothy C. Winegard.

Forget sharks, terrorists or guns: Mosquitoes have killed more people than all other factors in history combined. Of the 108 billion humans who have ever lived, almost half -- 52 billion -- have died from mosquito-borne illnesses. For 190 million years, the mosquito has been waging a war against the rest of the planet, and for all of that history we have been fighting a mostly losing battle.

This has long been one of my very favorite topics; I am thrilled there is finally a book dedicated to it.

No. 3. "The Man Who Solved the Market: How Jim Simons Launched the Quant Revolution" by Gregory Zuckerman.

This is my nominee for finance book of the year: I read it, reviewed it and interviewed the author for Masters in Business. All that’s left is to reread it slowly and deliberately, with no purpose other to enjoy the tale of how one brilliant man saw the markets in a different way from everyone else.

No. 4. "Hacking Darwin: Genetic Engineering and the Future of Humanity" by Jamie Metzl.

What will happen to children, lifespans, the plant and the animal world when humans begin to retool the world's genetic code? Metzl tackles the risks and potential rewards to tinkering with the determinants of life as if they're just another piece of software.

No. 5. "Biased: Uncovering the Hidden Prejudice That Shapes What We See, Think, and Do" by Jennifer L. Eberhardt.

Investors know that unconscious bias is at work all the time, undermining our goals. What we may not realize is how bias infects our visual perception, attention, memory and actions. The author suggests solutions to managing our biases, but I remain skeptical we can get past our own error-prone nature.

No. 6. "Range: Why Generalists Triumph in a Specialized World" by David Epstein.

Among top performers, specialization is the exception, not the rule. That’s the startling conclusion of Epstein, a journalist with Sports Illustrated and ProPublica. Considering some of the world’s most successful athletes, artists, inventors, scientists and business people, he found that it was the generalists who excelled, not the specialists.

No. 7. "The Spy and the Traitor: The Greatest Espionage Story of the Cold War" by Ben Macintyre.

What colleagues, institutions and competitors do you trust? How does counterintelligence and disinformation affect how we make decisions? These issues are explored in this nonfiction tale of the three-way Cold War game of espionage between the U.S., the U.K. and the Soviet Union.

No. 8. "Trick Mirror: Reflections on Self-Delusion" by Jia Tolentino.

Tolentino looks at the basic building blocks of social media and how we use it to deceive not so much others as ourselves. This series of essays tracks among other things the evolution of the internet from a band of enthusiastic geeks and hackers to the trolls and agents of agitprop that have taken over.

No. 9. "Talking to Strangers: What We Should Know about the People We Don't Know" by Malcolm Gladwell.

Communication breakdown is the focus in this tour of errors, miscommunication and lies. One of our era's most engaging storytellers, Gladwell roams from Fidel Castro to Bernie Madoff and lots of folks in between. His big premise: the default condition of our species is to assume others tell the truth. This makes all of us vulnerable to the deceptions of politicians, salespeople and con artists.

What happens if we rethink the concept of artificial intelligence as a drop in the cost of prediction? That is the question tackled by the three authors of this book, all economists at the University of Toronto’s Rotman School of Management. The conclusion is that AI, instead of complicating human affairs, may improve decision-making.Enjoy, and let me know if you’ve read any good books lately at britholtz3@bloomberg.net

To contact the author of this story: Barry Ritholtz at britholtz3@bloomberg.net