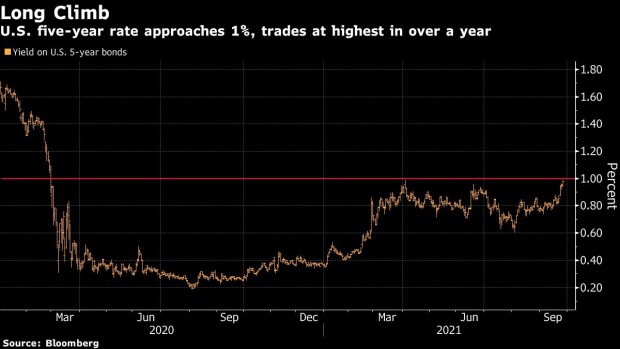 (Bloomberg) -- Treasuries fell, sending 10-year yields to a three-month high, as traders braced for a testing week of heavy bond auctions and continued to digest the prospect that central banks in the U.S. and Europe will step up the pace of policy tightening.

The yield on 10-year Treasuries reached 1.51%, the highest since June, before settling at 1.48%. The yield has climbed 16 basis points over the past week as the Federal Reserve signaled it may start reducing its asset purchases in November and raising rates as soon as next year. Yields on two- and five-year Treasuries hit their highest levels since early 2020, with a combined $121 billion of the securities set to be sold Monday. A seven-year auction is due Tuesday.

Bond yields increased across the globe last week as central banks move to reduce pandemic stimulus. The Bank of England surprised markets by raising the prospect of increasing rates as soon as November, and Norway delivered the first post-crisis hike among Group-of-10 countries. In the U.S., traders pulled forward wagers on an interest-rate increase to the end of 2022 following last week’s Fed meeting.

“All of the factors that were keeping yields lower in the second quarter and for part of third quarter are now starting to run in reverse,” Jim Caron, a money manager at Morgan Stanley Investment Management, said in an interview on Bloomberg TV. “It’s even possible that you could start to even test 2% by end of this year or beginning of next year.”

Bond investors are also on edge as an escalating power crunch across Europe and China threatens to put upward pressure on energy prices globally. West Texas Intermediate crude rose above $75 a barrel for the first time since July.

Inflation concerns driving a further bond selloff will be a “longer-term theme” for markets, said Kit Juckes, a strategist at Societe Generale. “Momentum is with the bond bears and higher oil prices alone could be enough to keep the move going.”

Traders will be watching a host of Fed speakers on Monday, including New York Fed President John Williams and Fed Governor Lael Brainard, to read the tea leaves of the internal debate at the central bank.

On Tuesday, Fed Chair Jerome Powell will join Treasury Secretary Janet Yellen in addressing the “CARES Act Oversight of the Treasury and Federal Reserve.” The two will also appear before the House Financial Services Committee for a hearing on their pandemic response on Thursday.