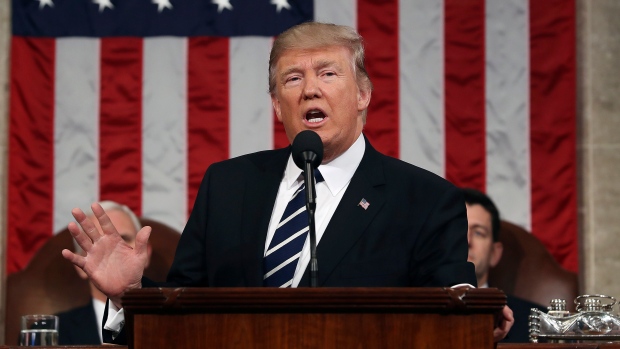 Donald Trump is sworn in as the 45th president of the United States. In his inaugural address, Trump pledges to put America first during his presidency. "Every decision on trade, on taxes, on immigration, on foreign affairs will be made to benefit American workers and American families," he said.

The next day more than four million people around the world attend the women’s march protesting the Trump administration. It is the largest single-day protest in U.S. history.

President Trump signs a memorandum withdrawing the U.S. from the proposed Trans-Pacific Partnership.

Trump signs an executive order directing the Department of Homeland Security to begin construction of a wall along the U.S.-Mexico border. Mexican President Enrique Peña Nieto rejects the idea that Mexico will pay for the wall and later cancels a planned meeting with Trump.

The next day Spicer says the wall could be paid for with a 20 per cent Mexico border tax. He later retracts the statement.

Trump also announces his intention to investigate voter fraud in the 2016 presidential election based on his unsubstantiated claims that millions of people illegally voted for his defeated rival Hillary Clinton.

British Prime Minister Theresa May is the first foreign leader to visit the White House since the inauguration.

Trump signs an executive order suspending refugee admissions for 120 days and denying entry to citizens from the Muslim-majority countries of Iraq, Iran, Libya, Somalia, Sudan, Syria and Yemen for 90 days.

Everybody is arguing whether or not it is a BAN. Call it what you want, it is about keeping bad people (with bad intentions) out of country!

Trump nominates Neil Gorsuch to the U.S. Supreme Court to fill the vacancy left by Antonin Scalia, who died in February 2016.

Trump makes his first speech to a joint session of the U.S. Congress. Pundits praise the “presidential” tone of the speech that addresses matters including immigration, gang crime, trade and infrastructure.

The U.S. Congressional House Intelligence Committee opens an inquiry into allegations of Russian interference in the 2016 elections.

U.S. Attorney General Jeff Sessions says he met with Russians during the election and later promises to recuse himself from any Russia–linked investigations.

Since November 8th, Election Day, the Stock Market has posted $3.2 trillion in GAINS and consumer confidence is at a 15 year high. Jobs!

In a series of early morning tweets, Trump accuses former President Obama of “wiretapping” Trump’s offices at Trump Tower during the election campaign. Trump provides no evidence and an Obama spokesman denies the claim. In the coming weeks, current and former intelligence and U.S. justice officials say there is no evidence to support the president’s claim.

Trump releases a preliminary draft of a 2018 budget calling for a US$54-billion increase in defense spending and deep cuts to foreign aid and the State and Environment Protection Agency.

Trump issues a second “travel ban.” The order removes Iraq from the list of Muslim-majority countries whose citizens were blocked. Several U.S. states file court challenges which ultimately strike down Trump’s order for a second time.

Trump holds a bilateral meeting and joint press conference with German Chancellor Angela Merkel. The meeting between the two leaders is noticeably awkward and Trump appears to ignore requests from both the media and Merkel to shake hands. 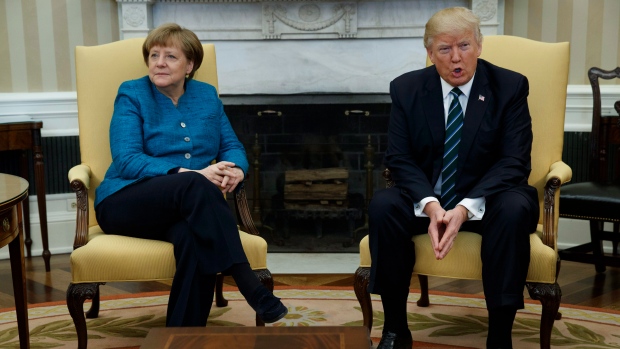 Trump issues a tweet rejecting allegations of collusion with Russia as "fake news”.

James Clapper and others stated that there is no evidence Potus colluded with Russia. This story is FAKE NEWS and everyone knows it!

A Republican bill to repeal and replace the Affordable Care Act, better known as “Obamacare”, is withdrawn indefinitely after U.S. House Speaker Paul Ryan admits the bill lacks the votes to pass. It is a major defeat for a promise Republicans have been campaigning on since Obama’s bill was passed in 2010.

Trump issues a presidential permit to allow construction of the Keystone XL pipeline by TransCanada Corp.  TransCanada CEO Russ Girling stands next to Trump during the Oval Office ceremony.  When Trump asks when construction would start, Girling replies, "We've got some work to do in Nebraska to get our permits there.”

Today, I was pleased to announce the official approval of the presidential permit for the #KeystonePipeline. A great day for American jobs! pic.twitter.com/5ga6XmpStG

The Trump administration delivers to the U.S. Congress a draft list of priorities for potential renegotiation of the North American Trade Agreement. It is the first step in opening up NAFTA.

Trump signs two executive orders aimed at preventing foreign trade abuses. The signing occurred behind closed doors after Trump walked out of a public signing without having signed the orders.

We are going to defend our industry & create a level playing field for the American worker. It is time to put #AmericaFirst & #MAGA! pic.twitter.com/GUWx7JqvCi

A Sarin gas attack in a rebel-held area of Syria kills at least 70 civilians, including children. After video footage of the casualties is broadcast, Trump calls the attack "reprehensible" and criticizes the Obama administration for not doing more to regulate chemical weapons.

Chinese President Xi Jinping arrives in Florida for two days of meetings with Trump at the Mar-a-Lago mansion.

Trump orders the firing of 59 cruise missiles at a military airbase in Syria as retaliation for the use of chemical weapons. The action is contrary to numerous tweets Trump issued over the years arguing the U.S. should not use military force in Syria.

Trump announces three major reversals in his economic policies. He says he will not label China a currency manipulator. He also indicates that he no longer wants to eliminate the Import-Export Bank – a government body similar to Canada’s Export Development Bank. And he says he could consider reappointing Janet Yellen as chair of the Federal Reserve.

In a speech in Wisconsin to promote his signing of a “Buy American, Hire American” executive order, Trump takes direct aim at Canadian dairy farmers. Trump says "unfair things have happened" to U.S. dairy farmers. While Canada’s dairy supply management system is not covered under the NAFTA, Trump reiterates his pledge to renegotiate the trade deal.

Trump doubles down on his attacks on Canada’s dairy sector and adds Canadian “lumber, timber and energy” to the list of trade irritants. Trump also steps up his attacks on NAFTA. "The fact is NAFTA, whether it's Mexico or Canada, is a disaster for our country. It's a disaster. It's a trading disaster.”

Trump follows through on this tough trade talk and imposes a 20 per cent tariff on Canadian softwood lumber imports.

The Trump administration continues to attack Canada on the trade front. U.S. Commerce Secretary Wilbur Ross tells reporters at the White House: “(Canada is) a close ally, they are an important ally, they are generally a good neighbour — that doesn’t mean they don’t have to play by the rules.”

Later, at a signing ceremony, Trump tells reporters he has “no fear” of a potential trade war with Canada.  "People don't realize Canada's been very rough on the United States," Trump said at a signing ceremony. "Everyone thinks of Canada as being wonderful, and so do I. I love Canada. But they've outsmarted our politicians for many years."

The Trump administration unveils a broad plan of tax cuts and tax reform that would drop the U.S. corporate tax rate to 15 per cent and simplify the tax code.

Both the Canadian dollar and Mexican Peso react amid reports that Trump is considering a plan to pull out of NAFTA.  After phone calls with both Canada and Mexico, Trump backs down from the threat, for now. 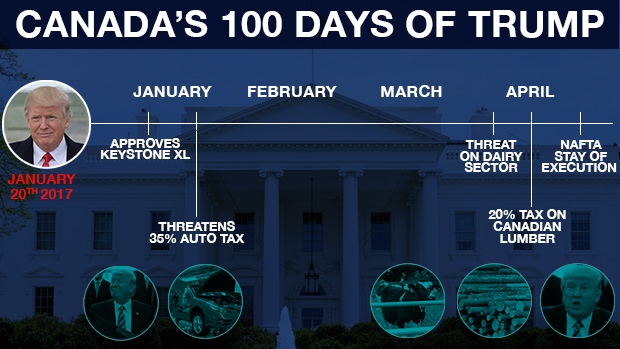