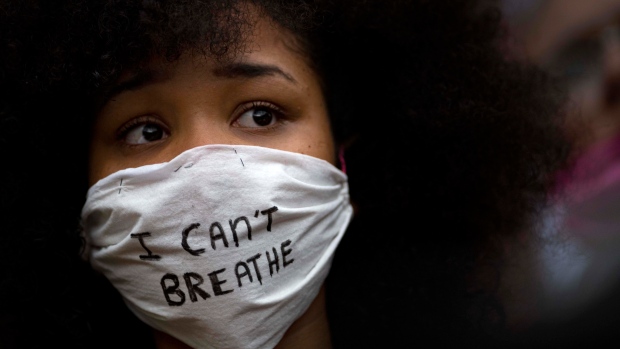 Shayana Dabney listens to speakers during a protest on the steps of the Colorado Springs Pioneers Museum in Colorado Springs, C.O., Saturday, May 30, 2020. Protests have been erupting all over the country after George Floyd died earlier this week in police custody in Minneapolis. Christian Murdock/The Gazette via AP

MONTREAL -- Eleven people have been arrested after tensions flared between protesters and police following a Montreal anti-racism demonstration on Sunday.

While the formal rally took place without incident, the situation later degenerated when some protesters smashed windows and lit fires and were met with pepper spray and tear gas from officers.

Montreal police say nine of the arrests are for breaking and entering, one is for armed assault and one is for mischief.

They say they have received 70 reports of damage to stores and other acts of mischief, and more arrests could follow.

The demonstrators had gathered to denounce racism and police impunity following the death of George Floyd, who died in Minneapolis on Monday after pleading for air while a white police officer pressed a knee on his neck.

Montreal police declared the gathering illegal after they say projectiles were thrown at officers, who responded with pepper spray and tear gas.