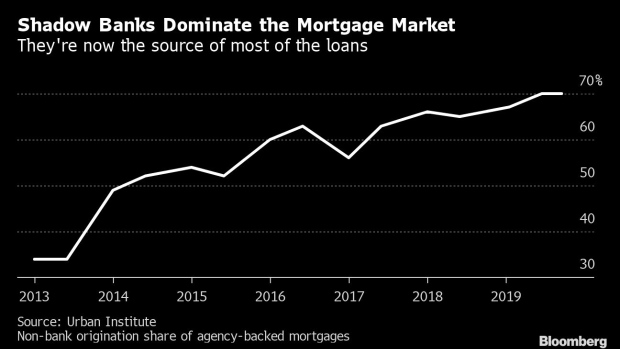 U.S. financial regulators led by the Treasury’s Steven Mnuchin and the Federal Reserve’s Jerome Powell have been put on notice about the risk of an economically damaging cash crunch in the $11 trillion home mortgage market.

Behind the concern aired recently at the Financial Stability Oversight Council headed by Secretary Mnuchin: The rapid growth of so-called shadow banks in the origination and servicing of home loans, especially riskier ones.

“There is a real weakness here,’’ said University of California, Berkeley professor Nancy Wallace, who co-authored a 2018 paper entitled ‘Liquidity Crises in the Mortgage Market’ with a fellow academic and three Fed economists. “Many of these firms are financially fragile.’’

That’s because they’re dependent on short-term bank credit lines that could be pulled at times of financial stress. The worry is that could end up hurting the housing market and the economy as the financiers are forced to cut back or curtail their mortgage business.

Staff from the Fed, the Federal Housing Finance Agency and the Conference of State Bank Supervisors gave a presentation on the “growth of nonbank mortgage origination and servicing and potential related risks,’’ the council said in a little publicized readout of the meeting.

The presentation focused on the industry’s reliance on short-run financing, including the possibility of liquidity drying up -- a concern highlighted in the paper Wallace wrote with Fed Deputy Associate Director Karen Pence.

It’s unclear how the regulators reacted to the presentation, but the fact that the issue came up at all underscores that the risk is on the radar screen. There’s no indication though that the council is considering singling out the business as a risk to financial stability. In fact, mortgage originations surged in the second quarter as lower interest rates enticed home owners to refinance their loans.

As conventional banks pulled back from the mortgage market due to limited profit opportunities and increased regulation after the financial crisis, the independent mortgage companies flooded in.

They currently originate around 70% of agency-supported residential home mortgages and about 90% of the riskier loans backed by the Government National Mortgage Association, or Ginnie Mae. Six of the top ten originators of home mortgages in 2018 were independent mortgage lenders, with Quicken Loans Inc. as number one.

The nonbanks also have increased their share of mortgage servicing to close to 50% of loans supported by Ginnie Mae, the Federal National Mortgage Association (Fannie Mae) and the Federal Home Loan Mortgage Corporation (Freddie Mac).

Unlike conventional banks, the independent mortgage companies are generally monoline operations, dependent on one business to make money. Of the dozen or so evaluated by Moody’s none have an investment grade rating on their debt.

They’re not regulated by the Fed or the Federal Deposit Insurance Corp. And they lack the deposit base and access to emergency Fed financing that commercial banks enjoy.

In originating loans, the nonbanks depend on credit lines to fund the mortgage until it is sold.

They also rely on short-term financing to cover their obligations as loan servicers when borrowers fall behind on their payments.

“Our greatest focus right now is on liquidity,’’ said Chuck Cross, a senior vice president at the Conference of State Bank Supervisors, one of the groups that presented at FSOC. “That short-term debt is tenuous and can disappear at the moment it is needed most.’’

The credit lines are subject to cancellation or revision if the mortgage companies violate any of the contracts’ covenants, including being profitable in at least one of the two most recent quarters.

Many were in breach of their covenants last year when a slump in mortgage refinancing helped push them into the red, said Warren Kornfeld, a senior vice president at Moody’s Investors Service.

But they were able to obtain waivers from their lenders and maintain the lines, given the overall strength of the economy.

That won’t be so easy though if the outlook is more uncertain, Kornfeld said.

The “risk is that many of these nonbank lenders will not be able to continue lending in difficult economic times,” JPMorgan Chase & Co. Chief Executive Officer Jamie Dimon said in the bank’s 2018 annual report.

Kornfeld doubted that conventional banks would rush to fill the void if the non-depository lenders exited the mortgage market.

“The banks will be cautious about stepping back in,’’ he said. “That will have an overall ripple effect on the economy.’’

“We think it’s something that can be managed,’’ he said.

He characterized the chance of thousands of mortgage lenders being hit equally by the same financial shock as “very small.’’

Quicken Loans Chief Executive Officer Jay Farner said the focus should be on an institution’s capital and its ability to withstand fluctuations in the economy, rather than on whether it’s a bank or nonbank.

“We’re better capitalized than 93, 94% of the FDIC- insured institutions,” he said.

He also took issue with suggestions that firms like his are lightly regulated, noting that Quicken is subject to oversight by 50 separate state supervisors as well as by federal agencies such as the Consumer Financial Protection Bureau.

There are some efforts underway to diminish the potential dangers in the mortgage market.

Ginnie Mae has tightened its liquidity and capital requirements for the financiers it deals with. It’s also asked for industry feedback on a potential stress testing framework.

The Conference of State Bank Supervisors is looking to establish uniform prudential standards for the non-banks that its members oversee.

“We’re not chicken little saying the sky is falling,’’ the conference’s Cross said. “But history has taught us that when we’re not paying attention to growing risks bad things can happen.’’

To contact the editors responsible for this story: Margaret Collins at mcollins45@bloomberg.net, Alister Bull