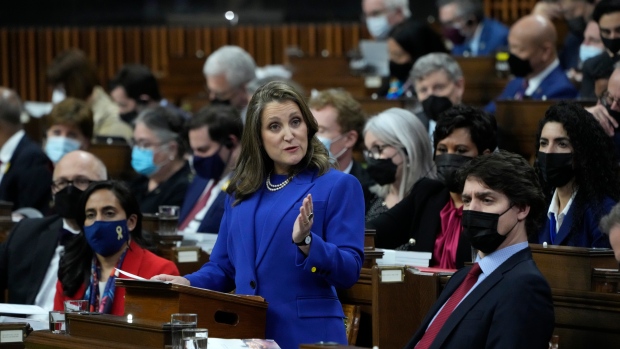 Coming in at a hefty 304 pages, there were plenty of measures to parse through in this year’s federal budget, from big-ticket spending items to smaller measures including support for PEI potatoes, a cryptocurrency review, and more details about sending Canadian astronauts deeper into space.

The feds are looking to make their plan for a high-frequency rail corridor between Toronto and Quebec City a reality, announcing $396.8 million over the next two years for Transport Canada to help plan and design new steps for the rail corridor. Originally announced last year, the high-speed rail project is not expected to be in service until early next decade.

Ottawa is moving up the timeline for the implementation of its publicly accessible ownership registry by two years, making good on one of the pledges made as part of the support agreement with the New Democrats. The registry – essentially a database of who ultimately owns and controls private corporations – is now expected to be accessible by the end of next year, two years earlier than initially promised.

The federal budget outlined plans for the feds to introduce a single, non-profit, external entity to address consumer complaints about the banks. Currently, there are two bodies that handle complaints, the Ombudsman for Banking Services and Investments, and ADR Chambers Banking Ombuds Office.

Beefing up the Canada Revenue Agency

Ottawa plans to give the CRA $1.2 billion over the next five years so the agency can expand audits of larger entities and non-residents engaged in “aggressive” tax-planning schemes. That measure is expected to recover $3.4 billion over five years in potential lost tax revenue.

The feds are also turning their attention to already-announced spending measures to see if savings could be found. Ottawa is planning to review spending plans to potentially reduce their size and scope in an effort to trim spending by $3 billion. An update on this initiative is expected in the fall fiscal update.

The Prince Edward Island potato industry is getting some love, after the discovery of potato wart prompted the U.S. to cut off imports for four months. Budget 2022 is setting aside a total of $28 million over the next two years on two initiatives to support the industry: $16 million to support long-term investments, and $12 million to help the Canadian Food Inspection Agency accelerate its investigation into the potato wart problem.

Ottawa has allocated $237.2 million over the next five years for Transport Canada to complete the construction of the Lac-Mégantic rail bypass. The bypass was originally slated to be completed next year, but the timeline has been pushed past 2023.

The federal government is launching a financial sector legislative review of the “digitalization of money”, including taking a closer look at digital currencies including crypto and how it fits into financial sector stability and security.

In the wake of last year’s devastating wildfires through much of Western Canada, Ottawa is earmarking more support for firefighting equipment. The budget sets out $269 million over the next five years to help provinces procure equipment like trucks and aircraft, and a further $37.9 over that span to train 1,000 new firefighters.

With housing at a premium and some Canadian families looking to a multi-generation home as a potential avenue, Ottawa is rolling out a Multigenerational Home Renovation Tax Credit, which would provide a credit of up to $7,500 toward the creation of a secondary suite for a senior family member or one living with a disability.

Studying the long-term impacts of COVID

While the development of the COVID vaccine was remarkably rapid, there are still many questions about the long-term effects of the disease. To that end, the feds are providing $20 million worth of funding to the Canada Institutes of Health Research over the next five years to research the potential long-term impacts of COVID.

Finally, the federal government announced plans to introduce new legislation to enable Canada’s participation in the Lunar Gateway program, a planned small space station in lunar orbit under development by NASA. If the project is completed, Canadian astronauts could be part of a crewed mission in the moon’s vicinity, which hasn’t been attempted since 1972.