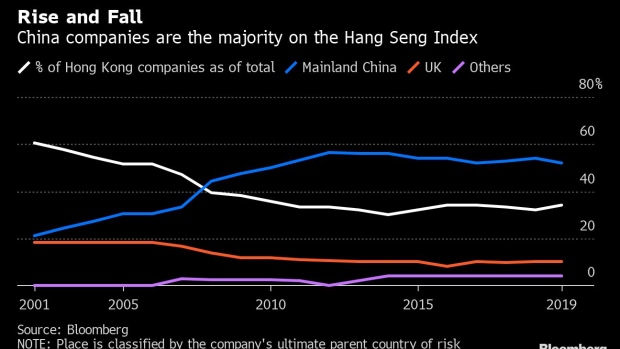 (Bloomberg) -- A mirror to Hong Kong’s fortunes since its 1969 launch, the Hang Seng Index has also become a reflection of China’s economic rise.

The benchmark stock gauge marks 50 years since its official debut on Sunday. Commencing as the city recovered from Communist riots two years earlier, it has served as a yardstick for Hong Kong’s rise and its rebounds from various crises -- a trait being tested anew as pro-democracy protests convulse the territory.

It’s up by around 16,700% since 1969, according to data compiled by Bloomberg (the index was backdated to July 1964 on its release). In that time its constituents have evolved from local firms to an embrace of mainland Chinese names that now account for more than half of its market value.

In August 1992, what’s now known as CITIC Ltd. became the first Chinese company to join the gauge. Today the majority of companies on the index get their revenue from mainland China.

The gauge’s correlation with the Shanghai Composite Index has been hovering near a record high, according to data compiled by Bloomberg. Between 2001 and 2019, two Hang Seng heavyweights Tencent Holdings Ltd. and China Mobile Ltd. were the biggest contributors to gains.

The index will need to continue adapting, said Arthur Kwong, head of Asia Pacific equities at BNP Paribas Asset Management. A wider embrace of Chinese mid-cap stocks is needed to stave off competition from rivals such as MSCI Inc. and FTSE Russell, he added.

“I’m still bullish on China’s large-caps, but this segment is more mature,” said Kwong. “I’m more positive on China mid-caps, the opportunities for growth are there. If the Hang Seng Index can be more flexible, it will do well.”

Hang Seng Indexes Co. says it is planning a consultation in the first quarter to review the presence of financial stocks, which currently account for about half the weight on the gauge. That compares with an average of 19% of its peers in Europe, U.S., Japan and mainland China, according to Bloomberg Intelligence.

It will also discuss including firms that have shares with different voting rights, held by technology companies like Alibaba Group Holding Ltd. -- one of the reasons Hong Kong lost out to New York in 2014 for the company’s initial public offering.

Alibaba’s $11 billion Hong Kong debut could provide a “shake up of the Hang Seng Index,” if it becomes a member, said Bloomberg Intelligence analyst Steven Lam. AIA Group Ltd. and HSBC Holdings Plc would likely to see their weightings reduced in the event, he said.

Hong Kong’s gauge has reflected the city’s growing pains, with crashes during the world oil crisis in the 1970s, the early-1980s impasse between China and Britain during handover talks and financial crises in 1997 and 2008. Now, the city’s markets are under pressure from five months of protests that have plunged the local economy in recession and an ever-changing whirl of trade war sentiment.

“There are some challenges to Hong Kong that are well documented,” said Tai Hui, Asia chief market strategist at JPMorgan Asset Management. “But Hong Kong has been through many past crises and has historically shown resilience. Long-term investors should bear that in mind.”

--With assistance from Amy Li.

To contact the reporter on this story: Jeanny Yu in Hong Kong at jyu107@bloomberg.net

To contact the editors responsible for this story: Sofia Horta e Costa at shortaecosta@bloomberg.net, David Watkins