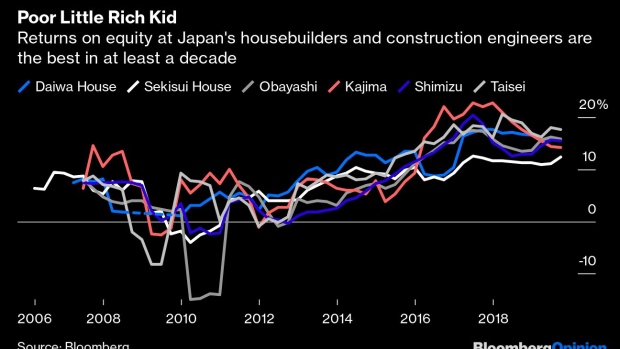 (Bloomberg Opinion) -- Prime Minister Shinzo Abe is working on a new fiscal-stimulus plan, turning to a time-tested tool of Japanese policymaking. It’s a shame the country needs a new round of pump-priming, given one of Abe’s great achievements had been to shake loose the nation’s reputation as an economic failure. Now, an ill-advised consumption-tax hike is looming over his legacy. In October, when the levy took effect, retail sales fell a record 14.4% from the previous month, putting gross domestic product on course for a steep contraction this quarter. Industrial production has also slumped far more than anticipated, according to a government report Friday.

The dismal data, and the impact of punishing typhoons, have fed speculation about the size of a spending package likely to be announced this month. Expectations have swelled to 20 trillion yen ($182.6 billion) from 5 trillion over the course of a few weeks. Even at 10 trillion yen, this would be the heftiest outlay since the devastating 2011 tsunami, as our Bloomberg News colleagues Toru Fujioka and Emi Urabe wrote.

It didn't have to be this way. The consumption-levy hike had been delayed twice because of concerns the economy would slide in the aftermath. The government thought the step necessary to reduce dependence on income tax, given the decline and aging of Japan's population. But proceeding when the country was buffeted by trade wars and a global factory slump was an error, as argued here and here.

To prevent a bad situation from getting worse, it's important that stimulus be used wisely. Japan's engineering and home-construction sector is sturdy right now, with returns on equity at the largest companies hitting their best levels in at least a decade. Public-sector building and civil-engineering work has a weighting of just 2.23% in the government's index of industrial activity; so money spent there will hardly move the needle when set against the vast services sector that has been hit by the sales-tax fiasco. This subset of Japanese industry is also performing better than any other slice of the economy.

To be sure, many communities are rebuilding after the typhoons, and Japan is preparing to host the Olympic Games next year. Some of the largess will likely find its way to supporting these endeavors. It’s also worth nothing that there’s nothing inherently wrong with running a budget deficit: The bulk of the nation’s debt is in yen and held by domestic savers.

Still, closing the year with budget activism rather than fresh monetary juice isn’t what many observers foresaw, particularly as other global central banks cut interest rates over the course of this year. Bank of Japan Governor Haruhiko Kuroda hasn't done much beyond tweak his forward guidance. So now it’s Abe’s turn to foot the bill. The International Monetary Fund’s Managing Director, Kristalina Georgieva, signaled support for his fiscal program during a visit to Tokyo last week.

Whatever the size of the fiscal package, keep in mind that any program helps paper over a policy mistake. You can bet that Japan won’t entertain another tax hike for a very long time.

To contact the authors of this story: Daniel Moss at dmoss@bloomberg.netDavid Fickling at dfickling@bloomberg.net