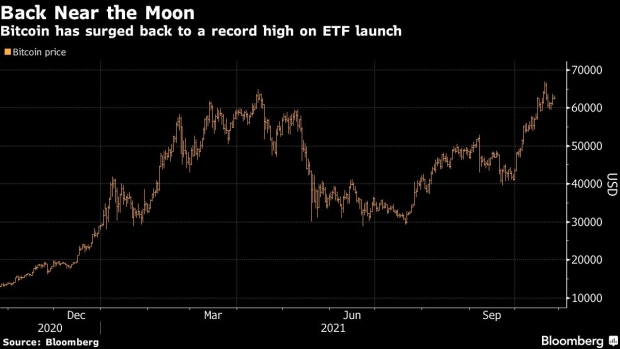 When Chris Taylor’s money-printing Dogecoin trade was wiped out in the $650 billion crypto crash back in May, the stakes were low. The 37-year-old was simply having fun YOLO trading from his personal account.

But now things are getting serious as Taylor helps spearhead a digital-currency initiative in his day job as senior investment partner at GSA Capital.

The $2.6 billion quant hedge fund is joining the likes of Steve Cohen and Alan Howard looking to profit from the famous volatility and inefficiencies across the now-$2.6 trillion market. That’s as long as Taylor and his fast-money peers can avoid getting crushed in the next crash.

“Our approach has always been: Let’s try to launch quickly -- try to capture as much upside as we can now -- because we know that at some point crypto hype will die down,” the hedge fund manager says in an interview at GSA Capital Partners LLP’s London office in Mayfair.

The 16-year-old fund is deploying the kind of systematic trades that have helped it net profits in the traditional world of stocks, derivatives and currencies. GSA started formally trading crypto assets in August, per Taylor. The University of Cambridge-educated mathematician declined to reveal the size of capital commitments but says it’s a modest part of the firm’s International Fund, with the potential to increase if performance is strong.

GSA is in the process of hiring its first head of crypto trading and operations. Taylor will continue his work on crypto as well as longstanding duties including overseeing a trend-following strategy in traditional assets.

It’s a well-timed move, with the bull market revival lavishing easy rewards for market-neutral quant trades beloved by hedge funds like GSA. Bitcoin has rallied more than 40% this month alone to trade at records after the launch of an exchange-traded fund tracking futures on the world’s largest digital currency.

In turn, the funding rate for financing long positions in Bitcoin futures -- a popular trade in bull cycles -- has returned to levels last seen before the May selloff on the largest exchange Binance, Bybt data show. GSA is duly taking advantage of the discrepancy by going short the derivatives and long the spot, a classic arbitrage trade and the closest thing to a free lunch in the crypto market.

Read more: Crypto’s Just-About-Risk-Free Trade Is Back -- and in a Big Way

GSA, which started as the Global Statistical Arbitrage desk at Deutsche Bank AG, is also applying the quant technique to crypto futures in a bid to exploit price patterns.

That’s not to say executing systematic trades is smooth sailing. Far from it. There are no one-stop-shop prime brokers, while exchanges are nothing like their Wall Street equivalents. For instance, GSA has to put down excess collateral because platforms can liquidate positions with no warning.

As Taylor himself learned the hard way earlier this year, these liquidations can be so extreme that even profitable wagers, such as his Dogecoin position, can be closed if exchange operators are struggling to absorb the negative balances of other traders when the market crashes.

Then there’s custody. With the industry notoriously prone to hacks, many investors store their tokens in cold storage or wallets disconnected from the internet for safekeeping. Yet hedge funds still need to transfer them to exchanges for trading. There still isn’t a great solution to balance liquidity with security, according to Taylor, who’s using platforms like Twitter, Telegram and Discord to get to grips with his new gig.

“It’s interesting to be involved in something new where you feel that there aren’t a lot of people you can go to to explain how it’s done, and there aren’t existing procedures for how the operational set-up should look,” he said.