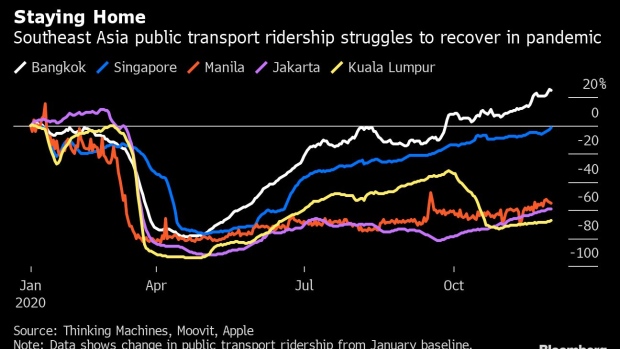 Motorcycle taxis are a regular fixture in congested Indonesian cities where transport infrastructure is limited and gridlock is among the worst in the world. , Bloomberg

Millions of sidelined motorcycle taxi drivers in Indonesia are bracing for a long recovery as the country’s coronavirus outbreak shows no signs of abating.

The taxis -- known locally as “ojek” -- are a fixture in congested Indonesian cities where transport infrastructure is limited and gridlock is among the worst in the world. They’re also the inspiration for Indonesia’s most valuable startup, the ride-hailing and food-delivery app Gojek.

The ojek drivers are a bellwether for Southeast Asia’s largest economy, as they facilitate consumer spending and business activity. Roughly 40% of the country’s estimated 5 million ojek drivers have lost their jobs in the pandemic. President Joko Widodo has been hard-pressed to tame unemployment and pull the economy out of recession, while keeping a lid on Covid cases that have topped 700,000.

“We pray to God every day that the situation can recover as soon as possible,” said Igun Wicaksono, who heads the industry association Garda in Jakarta. “These are very basic jobs we have.”

Spikes in Covid-19 infections and deaths have ushered in a raft of stricter social-distancing measures this month, threatening to undercut a gradual improvement in ridership since the worst of the crisis. Amid gaps in social-safety nets, drivers are resorting to lower-paying gigs. Wicaksono estimates that drivers are seeing only about half their prior business.

The government is aiming for 5% economic growth next year, hoping that stimulus spending and an aggressive vaccination plan can boost private consumption. The economy is expected to shrink as much as 2.2% this year, Indonesia’s first annual contraction in more than two decades.

Amid gaps in social-safety nets, drivers are resorting to lower-paying gigs that may not be enough to pay down loans they took for their motorbikes, according to Joanna Octavia, a doctoral researcher at the U.K.-based Warwick Institute for Employment Research.

“For an ojek driver, their most important asset is their motorcycle. It’s the way to get around and the way they generate an income,” she said. “If that was taken away, it would be very difficult for them to start all over again.”

That could have broader implications for the economy, where the ranks of the jobless are growing. The sector has been crucial in absorbing low-skilled labor, Octavia said, since all drivers need is a license and a bike to earn money.

Ohci Heavyani, 35, used to earn about 300,000 rupiah ($21.18) a day as a driver for Gojek. A mother of two and her family’s breadwinner, she works full time and her pay is well above Jakarta’s minimum wage.

Heavyani currently makes about seven trips a day, mostly to deliver food or parcels. That’s up from almost zero at the height of Indonesia’s lockdown, but still a fraction of the 20 daily trips she used to make.

With only a one-time assistance of food and cash vouchers from Gojek, Heavyani has had to slash expenses and borrow money from friends and family to make ends meet.

READ MORE: Covid Has Wiped Out t he Economic Dreams of an Asian Generation

“A lot of my driver friends are selling food or stuff to generate other income,” she said. “They usually use the government social-assistance money as capital, but I don’t qualify for that.”