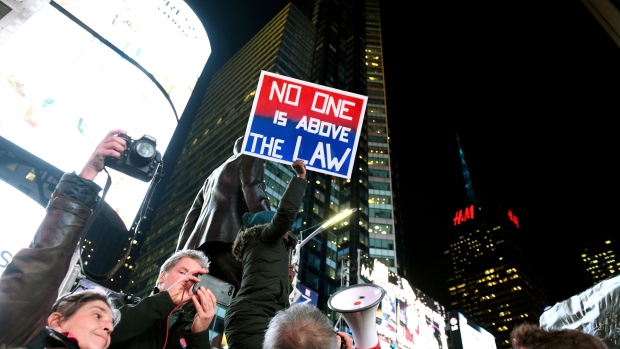 (Bloomberg Opinion) -- Some crimes take only minutes, even seconds, to execute. Now imagine how many seconds Donald Trump has between this moment and Election Day.

For Democrats, too, November is far away. But what Trump does in the months ahead will be at least as important to the presidential contest as what Democrats do. There are plenty of crimes to come.

The Democratic primary is messy. Results in New Hampshire were no more decisive than results in Iowa. As the multi-headed candidate beast makes its way to Nevada, South Carolina and beyond, uncertainty may linger. While Democrats seem favorably disposed toward most of their candidates, they seem unlikely to settle on one soon.

Yet against the sordid backdrop of Trump’s presidency, a long Democratic ordeal may not matter much in the end. By November the presidential campaign will come down to one overarching issue — and it won’t be Bernie’s revolution or Mayor Pete’s crisis of belonging or Elizabeth Warren’s big structural change.

Rule of law has been good to the U.S. It has made free speech a reality. It has given confidence to entrepreneurs who launch businesses with the faith that their enterprises won’t be stolen if they prove successful. It has, in the modern era until Trump became president, kept grifting within recognized boundaries and restricted outright graft mostly to the fringes of public life.

True, many innocent, mostly poor, people have gone to jail. But explicitly political convictions are relatively rare. And the ideal of law as an agent of justice has often forced the legal system to correct itself.

Trump has spent his presidency attacking rule of law from every imaginable direction. Grift has sprawled, with his children pocketing favors from dictators, the federal government pouring money into Trump’s pockets, and Trump exercising foreign policy for his exclusive benefit. Graft is in the open as lobbyists, spies and sundry money-grubbers pay the president while seeking favors from him at his for-profit clubs. And the law is increasingly deployed, under Attorney General William Barr’s reign, to protect the president and his friends while threatening his enemies — especially law enforcement agents, such as James Comey and Andrew McCabe, who sought to expose the president’s wrongdoing.

Yes, the presidential election will decide other issues, such as access to health care in America. But everything that Democrats hope to do now or in the future, whether defined as democratic socialism or regulated capitalism, depends on rules-based, lawful and uncorrupted systems of government and justice.

Such systems are what Trump seeks to destroy.

He has a stunning array of help. The U.S. Chamber of Commerce and the Business Roundtable continue to fund the party that is undermining rule of law. Tens of millions of Americans appear to be under the impression that abuses will be limited to people they dislike. In the GOP there is a growing pro-Putin faction. And aside from Senator Mitt Romney and newly independent Representative Justin Amash, the congressional GOP leads cheers for corruption and lawlessness. If Trump is re-elected, Republicans will grant his every desire, with the blessing of a debased and Trumpified Department of Justice.

Regardless of how the Democratic primary evolves, or who the nominee is, Putinism with Trumpian characteristics will be the most important issue in November. If Trump wins, it’s true you can forget about Medicare, whether for some or all. More important, however, you can forget about the rule of law. It won’t just be battered, as it is today. It will be gone. Only the thugs won’t miss it.

To contact the author of this story: Francis Wilkinson at fwilkinson1@bloomberg.net

To contact the editor responsible for this story: Tracy Walsh at twalsh67@bloomberg.net