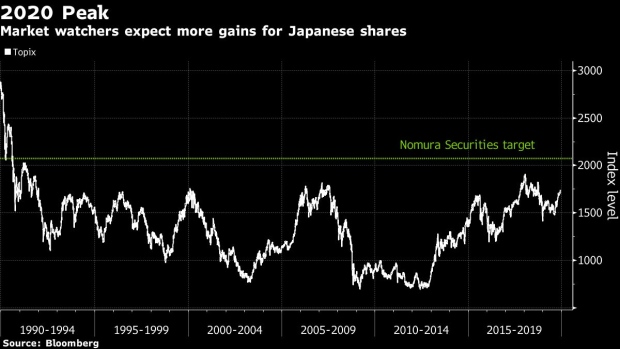 Pedestrians waiting to cross a road are reflected in an electronic stock board outside a securities firm in Tokyo, Japan, on Wednesday, Oct. 18, 2017. As Prime Minister Shinzo Abe's ruling party heads for what polls suggest will be its best national election result in more than three decades, Japan's stock market has surged to heights not seen since before the financial crisis. Photographer: Kiyoshi Ota/Bloomberg , Photographer: Kiyoshi Ota/Bloomberg

(Bloomberg) -- Japan’s stock-market rally has more to go, and the Topix index might reach a peak by mid next year, some strategists and fund managers say.

Nomura Securities sees the benchmark gauge rallying as much as 19% to 2,075, buoyed by pick up in corporate earnings. Jefferies and Goldman Sachs Japan are among those that expect a recovering global economy will help boost the shares.

While the outlooks are mostly positive, market watchers project the rally will lose steam as the year progresses. Nomura strategist Yunosuke Ikeda says the U.S. presidential election is an “important” risk factor that may impact assets after mid-2020. Okasan Securities’ chief strategist, Fumio Matsumoto, sees a long-term economic cycle peaking after the summer, before a correction hits Japan’s equities between 2021 and 2023.

2019 was a year of two tales for Japanese shares. The market was one of the worst performers of the developed world in the first eight months as its exporters suffered from the U.S.-China trade war. But starting in September, optimism over the two countries’ negotiations helped boost the Topix, sending it to its highest level since October 2018. Tech shares led the gains this year, while energy producers fell the most.

With a valuation of 14 times estimated earnings, the Topix is now slightly above its five-year average of 13.6 times, data compiled by Bloomberg show.