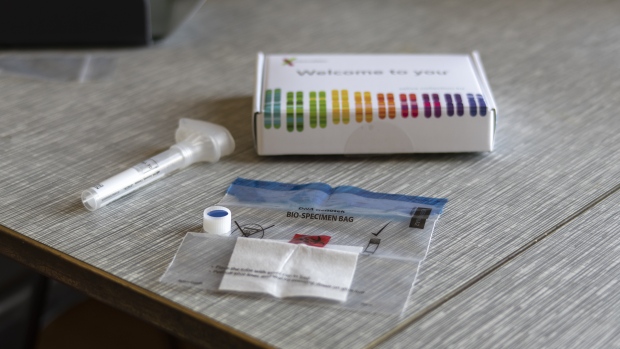 A 23andMe Inc. DNA genetic testing kit is arranged for a photograph in Oakland, California, U.S., on Friday, June 8, 2018. , Bloomberg

Mall shoppers could soon be able to learn more about their genes while they pick up some new jeans.

23andMe Inc. opened a holiday-season pop-up store last week at the Westfield Valley Fair mall in Santa Clara, California, where customers can buy one of the company’s DNA-testing kits and learn more about how they work and what they might reveal.

The pop-up could be merely the first 23andMe store, Chief Executive Officer Anne Wojcicki told Bloomberg last week during a visit to the space. If the experiment is successful, the company could replicate it elsewhere.

“In the future, I think that there’s all kinds of in-person experiences that would be valuable to customers,” she said. “We’ll see what the experience is like.”

At-home genetic tests have been popular holiday gifts for the past few years, as more people decide to investigate their family history by sending a saliva sample off to companies like 23andMe for analysis. 23andMe says that it’s sold more than 10 million of its kits, which retail for as much as $199, since its founding 2006.

The temporary shop opened on Oct. 1 and will remain through January. It’s located next to the mall’s Apple Store — prime real estate to attract tech-savvy shoppers curious about their genome.