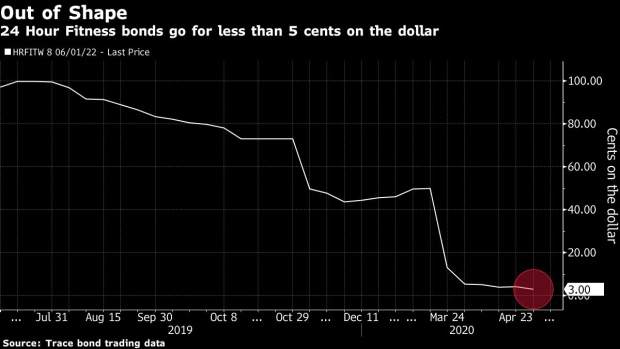 (Bloomberg) -- Gym owner 24 Hour Fitness Worldwide Inc. is preparing for a potential bankruptcy to cut its debt as it re-opens locations across the country with precautions in place for social distancing.

The operator of more than 430 mid-tier gyms is in talks with investors over the terms of a loan that would keep the company operating through a court restructuring, according to people with knowledge of the situation. The proposed Chapter 11 filing would cut 24 Hour’s borrowings by swapping debt for equity and handing control to lenders, said the people who asked not to be named discussing a private matter.

Even before the pandemic, the company, which has more than $1.3 billion of debt stemming from a leveraged buyout by AEA Investors and the Ontario Teachers’ Pension Plan in 2014, was struggling to hold onto to customers lured by gyms that were either cheaper or fancier.

24 Hour is getting advice from restructuring lawyers at Weil, Gotshal & Manges LLP as well as investment bankers at Lazard, the people said. Plans are in flux and could change depending on future re-openings and ongoing negotiations with creditors and 24 Hour’s landlords, they said.

“We are considering a broad range of options to ensure the long term sustainability and success of 24 Hour Fitness and we are not going to comment publicly on our strategic plans,” the San Ramon, California-based company said in a statement to Bloomberg. “We look forward to continuing the reopening of our clubs as we are operationally prepared.”

Management had been in negotiations with creditors to rework its debt load, but those talks ended in a stalemate around the time of the mandated gym closures, 24 Hour Fitness said in a March 23 earnings report.

A bankruptcy would give majority control to lenders who would swap their holdings for equity interest, according to the people. Plans being discussed would wipe out the existing equity holders and leave bondholders with little to no stake in the reorganized company, they said.

The company’s bonds due 2022 last traded at 3 cents on the dollar on May 12, according to Trace bond trading data.

The entire fitness industry is reeling from forced closures due to the pandemic. Gold’s Gym International Inc. sought court protection from its creditors after the prolonged shutdown caused revenue to tumble and kept members at home. Town Sports International Holdings Inc., the owner of New York Sports Club, is also wrestling with an upcoming debt payment and may file Chapter 11 if it can’t reach a resolution with its lenders, Bloomberg reported.

Even before the onslaught of Covid-19, middle-tier operators like 24 Hour struggled with customer defections to higher-end or budget-friendly fitness options. The gym operator reported a 2% revenue decline in unaudited fourth-quarter earnings.

Privately held 24 Hour reported a slide in 2019 earnings in January partly due to the rocky debut of an automated system for checking in and signing up customers. Memberships at the company fell to 3.4 million in 2019’s third quarter from 3.5 million in the second quarter, according to Moody’s Investors Service.

Cancellations are killers for gyms. It costs twice as much to recruit a new member as it does to retain an existing one. Fitness clubs rocked by Covid-19 closures face a swell of bankruptcies with more than $10 billion of revenue wiped out as clients ditch memberships, according to investment bank Harrison Co.

Globally the fitness and health club industry could shrink to $45 billion this year from $85 billion in 2019, market researcher WinterGreen Research estimates. That’s assuming people would be slow to return to packed gyms.

24 Hour had to close all its gyms in the middle of March in line with other businesses across the U.S. to stop the spread of the virus. The company fully drew on its $120 million revolving credit facility as a precautionary measure due to the expected impact of the pandemic.

As state and local officials started relaxing shutdown provisions, 24 Hour began re-opening locations in Texas. As of this week, the company will have opened 10 clubs in Dallas and Fort Worth Texas, and plans to open an additional six clubs in Houston next week, the company said in the statement, adding that the situation was fluid.

Nationally, around 45% of states are allowing clubs to reopen at least in part, excluding some of the most populous states like California and New York, according to the International Health, Racquet & Sportsclub Association. Many clubs report around 30% of members returning, with more fortunate ones reporting around half returning, the trade group said.

To encourage its members to feel comfortable coming back to the gym, 24 Hour developed measures such as touch-free check-in service through its mobile app, the company said in its statement. Clubs that are open will have 60-minute window for workouts, followed by a 30-minute closure for cleaning throughout the day.

“We take great pride in helping people change their lives through fitness and can’t wait to see our club and team members again when it is safe to do so,” 24 Hour said in the statement to Bloomberg.