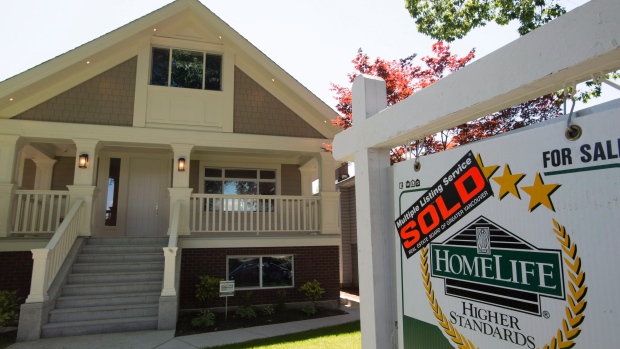 A sold sign is pictured outside a home in Vancouver, B.C. , The Canadian Press

An alarming number of house-poor Canadians are teetering close to the edge in terms of meeting their debt obligations, according to a poll conducted on behalf of MNP. The report from the chartered accountancy firm says even a modest increase in interest rates could push many homeowners over the edge.

“Three in ten home owners say that they will be faced with financial difficulties if the value of their home goes down,” the report read. “Even if home values don't decline in the near future; more than a quarter of Canadians (27 per cent) who have a mortgage agree that they are 'in over their head' with their current mortgage payments.”

The Bank of Canada could deal a blow to those homeowners at this Wednesday’s meeting, as market participants are pricing in 93.1 per cent odds of a rate increase. The MNP report said it wasn’t just those with a mortgage who could run into trouble if Stephen Poloz pulls the trigger on the Bank’s first interest rate increase since 2007.

“Over seventy percent of Canadians rate their ability to cope with a [one per cent] interest rate increase as less than optimal,” the report reads. “The vast majority of Canadians (77 per cent) would have difficulty absorbing an additional $130 per month in interest payments on debt.

MNP President Grant Bazian warned in the report that Canadians who have taken out home equity lines of credit may be at particular risk.

“Many are borrowing against their homes and using them to finance lifestyles they simply can't afford. What's worse is that many are not making regular payments against the principal, and the threat of an increase in interest rates might make it even harder to make ends meet," Bazian said in the release. “We've been living with this 'minimum payment mentality' for far too long. Collectively we need to start looking critically at our debt loads and factoring in interest rate changes to see if the debt amassed is even affordable.”