Canadians are more concerned now than ever with their personal finances: MNP president

Thirty-one per cent of respondents to an Ipsos survey conducted for MNP said they don't earn enough to pay their bills and debt payments, and almost half of all respondents (49 per cent) said they are within $200 of insolvency.

“It's a bit unnerving. It almost seems unrealistic. But this is what the survey continues to tell us, that people are concerned and that they're $200 away from not making their financial obligations,” said Grant Bazian, president of MNP Ltd., in an interview.

Two thousand Canadian adults were surveyed by Ipsos from March 9-15 — about one week after the Bank of Canada raised its main policy rate for the first time since 2018. The central bank ramped up its efforts to rein in inflation last week when it delivered its first half-point hike since 2000, and also announced it would start allowing its balance sheet to shrink later this month.

The survey for MNP demonstrates the extent to which some Canadians were being squeezed prior to last week's supersized hike.

A little more than half of respondents (52 per cent) said in March they were already feeling the effects of higher rates, according to the release from MNP on Monday.

“I would imagine now that with the extra (rate) increase that's already happened, that angst and nervousness has probably picked up even more,” said Bazian.

The most recent official data from the Office of the Superintendent of Bankruptcy, shows 7,392 Canadians filed either for bankruptcy or a proposal to settle debts under alternate terms in February. That was a 12.6 per cent increase from January, and a dip of 1.6 per cent from a year earlier. By comparison, prior to the pandemic taking hold in Canada, there were 11,251 bankruptcy and proposal filings by consumers in February 2020.

Bazian said there was “most definitely” some complacency among Canadians as emergency COVID-19 aid programs shielded households from the economic ravages of the pandemic. He added that the Canada Revenue Agency (CRA) wasn’t as aggressive for a period of time, and that banks didn’t “want to be seen as the bad guy.”

Bazian acknowledged that the survey is strictly based on sentiment, since Ipsos and MNP aren’t analyzing respondents’ financial accounts. However, he said that with the overall survey index slipping to the lowest level since it was introduced in 2017, there are worrying signs about how some Canadian households are holding up. 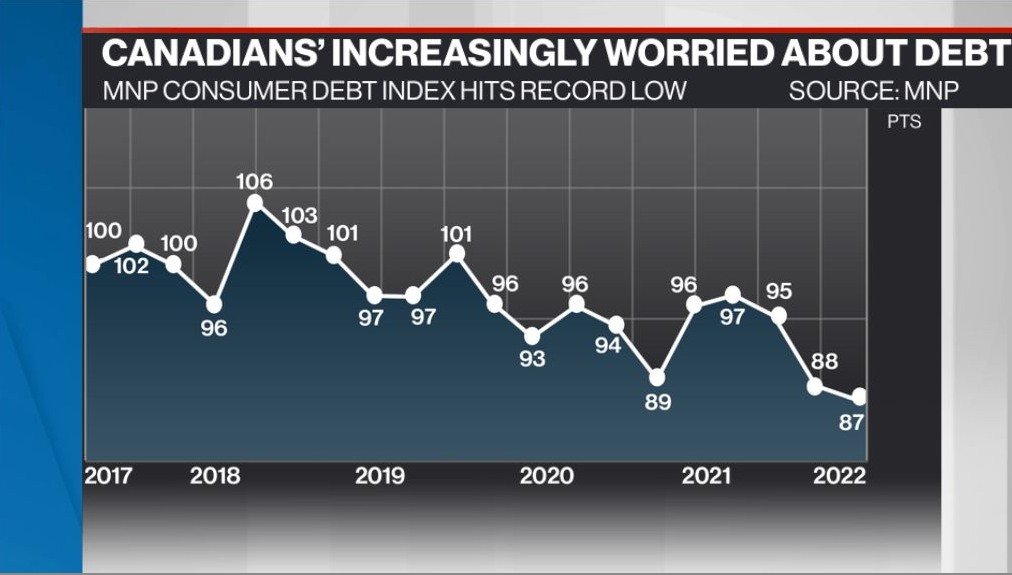 “Our index is very clear. It’s the sentiment of the Canadian. They’re showing that they’re more concerned now than ever.”

The Bank of Canada's rate hikes ripple through the country's housing markets by pushing up prime rates, which are linked to variable-rate mortgages. For Canadians who take out fixed-rate mortgages, the bond market was pushing up the cost of borrowing long before the central bank started hiking.

“I like to say the glue that holds all this together was low interest rates. It’s (sic) been so low for so long a period that people are structuring their finances around those low interest rates,” Bazian said.

“So when the subsidies and the relief is coming to an end, and the grace periods by some of the lending institutions may be coming to an end, coupled with rising interest rates — I think that’s where you’re getting the nervous tendencies.”