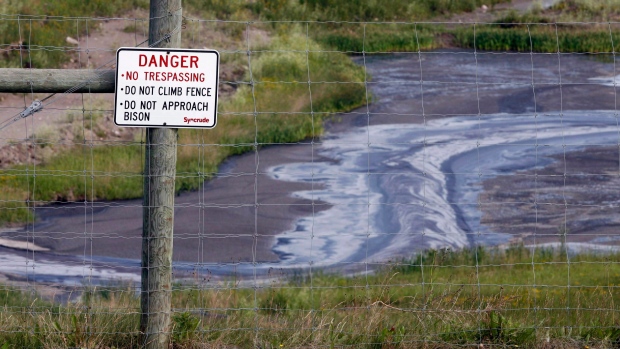 Tailings drain into a pond at an oil sands mine facility near Fort McMurray, Alta. , THE CANADIAN PRESS/Jeff McIntosh

Amid the bogs and forests of northern Alberta, in the heart of the Canadian oil patch, lie some of the largest waste dumps of the global energy business.

In the shadow of the pipes and smokestacks that turn oil sands into flowing crude, earthen dams as long as 11 miles encircle lakes of toxic sludge, the byproduct of decades of extraction.

These waste pools -- known as tailings ponds -- represent perhaps the most serious environmental challenge facing the oil-sands industry. Now, the battle over how quickly to clean them up -- and fears about who will pay -- are escalating anew.

To howls from environmentalists, the provincial energy regulator granted two industry giants -- Suncor Energy Inc. (SU.TO) and Canadian Natural Resources Ltd. (CNQ.TO) -- approval for plans that could push a full cleanup decades into the future. Critics say the industry could end up sticking taxpayers with the bill, estimated at $27 billion.

At issue is how, and by extension when, the ponds must be returned to a natural state. The industry is seeking more time to find cheaper ways to do the job. Environmentalists argue the problem has festered for half a century -- and the waste keeps piling up.

“Rather than waiting for that silver bullet and continuing to test things out in the lab, we think that the technologies that exist today should be implemented in full force,” said Jodi McNeill, a policy analyst at the Pembina Institute, an energy researcher in Calgary.

Oil-sands companies dispute the notion they’re dragging their feet. Suncor is approaching the cleanup with urgency, investing “significant resources and capital,” spokeswoman Sneh Seetal said. With the help of improved technologies, the company now can treat three times the tailings it produces in a year, helping shrink the backlog that’s built up over decades, she added.

Canadian Natural works to minimize environmental impacts and plans its land use with the end of the mines’ life in mind, spokeswoman Julie Woo said. The company already has reclaimed 378 hectares (934 acres) and planted more than 630,000 trees at its Horizon mine site since 2009, she noted.

For decades, tailings -- a goopy mix of sand and chemicals -- have been pumped into ponds so the solids could settle. But settling has taken longer than engineers expected. Result: Alberta’s tailings ponds cover about 97 square miles and hold 340 billion gallons of waste. That’s enough to fill more than half a million Olympic-size swimming pools.

The reservoirs attracted global attention in 2008, when about 1,600 ducks died in a Syncrude Canada Ltd. pond. Similar, though smaller, incidents have been reported occasionally since then, including the deaths of more than 100 birds near a Suncor tailings pond in September.

Tailings are treated using a variety of methods in combination, such as chemicals and centrifuges to speed the settling process. The final step, known as water capping, entails pumping the tailings into pits and covering the sludge with water.

Suncor has successfully transformed a tailings pond into a 220-hectare watershed capable of supporting plants and wildlife.

“That land is now a thriving ecosystem,” Seetal said, noting that bears and other animals have been spotted there. The company also has capped another pond with a layer of petroleum coke so vehicles can travel over it.

Still, provincial regulators estimate that cleaning up oil-sands facilities represents a $27 billion liability, of which the companies have posted only about $1 billion in security. Environmental groups say the cost could be much higher. The province also holds oil-sands assets against the liability. But McNeill says they are one of the highest-cost methods of producing crude, making them vulnerable to falling oil prices caused by a continued boom in American shale or the rapid adoption of electric cars.

Suncor heard similar concerns amid the oil-price downturn that started in 2014, and the company has shown it can prosper even with lower crude prices, Seetal said.

“We’re in this business for the long haul, and we have a history of being a responsible developer,” she said.

So far, the industry has spent about $12 billion on treating tailings and $50 million on research, according to Dan Wicklum, chief executive of Canada’s Oil Sands Innovation Alliance. In addition to new filtration methods, the industry also is testing injecting carbon dioxide into tailings and running electrical currents through them to help the solids settle out more quickly, he said.

Vancouver-based MGX Minerals Inc. and PurLucid Treatment Solutions Inc. have teamed up to create a technology that filters tailings to produce lithium that could be sold for use in batteries. The Canadian government provided $8 million to scale up a pilot. One challenge is scaling such technology to handle the massive flow of tailings, Wicklum said. Another is finding a solution that’s economical and energy efficient. “We don’t want to solve one problem and exacerbate another.”

Time is short, according to Pembina’s McNeill, who characterized the tailings ponds as nothing less than an environmental emergency. “After 50 years, we’re still seeing the can kicked down the road.”