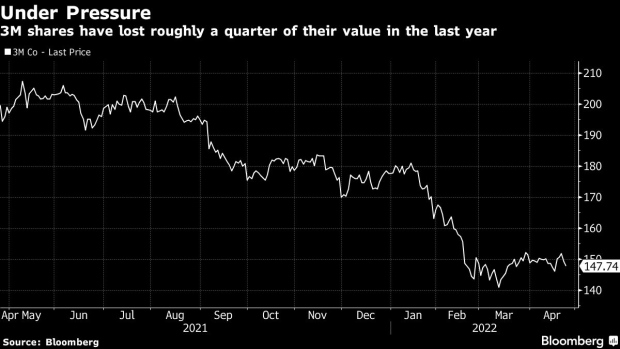 Mike Roman, chairman and chief executive officer of 3M Co., reacts during a panel discussion at the Bloomberg New Economy Forum in Beijing, China, on Friday, Nov. 22, 2019. The New Economy Forum, organized by Bloomberg Media Group, a division of Bloomberg LP, aims to bring together leaders from public and private sectors to find solutions to the world's greatest challenges. , Bloomberg

(Bloomberg) -- 3M Co.’s top executive said Covid-19 lockdowns in China and the war in Ukraine will only add to the supply-chain strains that have beset the manufacturing giant this year.

Supply lines were already struggling to catch up with surging demand and will continue to pose challenges for the “foreseeable future,” Chief Executive Officer Mike Roman said in an interview. Shares of 3M were down 2.5% to $144.85 at 3 p.m. in New York.

As recently as February, “we were, I would say, optimistic that things would improve as we got to the second half of the year,” Roman said. “We’re now in the second quarter and I don’t see on July 1 everything being much better.”

Other manufacturers have been more optimistic that snarls in global supply chains will soon get straightened out.

Sherwin-Williams Co. CEO John Morikis on Tuesday said the paint maker is through the worst of the industry’s supply-chain challenges. Rival PPG Industries Inc. last week pointed to an array of improving signals, from lower U.S. worker absenteeism to waning congestion at ports outside China. Defense contractor Raytheon Technologies Corp. said on Tuesday that supply-chain constraints should ease in the back half of 2022.

Roman said some hurdles are easing, such as absenteeism due to the omicron wave of the coronavirus. Others aren’t. A dearth of semiconductors continues to crimp output of autos and electronic devices, both key markets for the maker of touch-screen displays, surgery supplies and Post-it Notes. High raw-material and logistics costs pinched profit margins at 3M’s divisions that supply health-care products and consumer goods.

Russia’s invasion of Ukraine, now in its third month, has made supply-chain constraints worse, St. Paul, Minnesota-based 3M said in an earnings presentation on Tuesday. The company reported a 2% increase in organic first-quarter sales and adjusted earnings of $2.65 a share. The latter figure excludes litigation costs and a charge for the cleanup of a chemical plant in Belgium.

3M has multiple facilities in Shanghai. While they’re able to operate, getting workers to the plants has been a challenge, Roman said. Lockdowns put in place by Beijing to try to halt the spread of the virus have strained local supply chains, cutting into available cargo capacity, extending lead times for supplies and boosting backlogs at its factories.

“I do hope that it gets better as we go, and I’m optimistic that it will get better,” he said. “Trying to predict that is very difficult.”