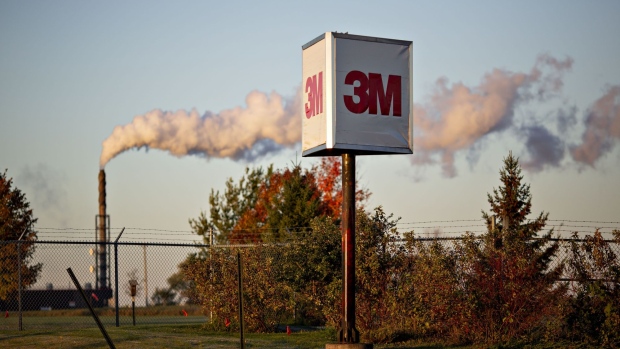 Signage stands outside the 3M Co. Cottage Grove Center in Cottage Grove, Minnesota, U.S., on Thursday, Oct. 18, 2018. 3M's Cottage Grove factory had been churning out some varieties of Per-and polyfluoroalkyl substances (PFAS) since the 1950s for the water- and stain-repellant Scotchgard. Recent studies have linked widely used PFAS to reduced immune response and cancer. As awareness spreads, 3M has been named in dozens of lawsuits, several this year alone. The company said the chemicals aren't a danger to public health. Photographer: Bloomberg/Bloomberg , Photographer: Bloomberg/Bloomberg

(Bloomberg) -- 3M Co. plans to eliminate jobs as part of a broader cost-cutting drive in response to the slowing economy, according to internal communications.

The move comes just days after 3M suffered a setback over a key legal strategy designed to mitigate mounting liabilities and as it faces an array of other challenges, ranging from inflationary woes to sluggish growth.

Michael Vale, head of 3M’s safety and industrial division, disclosed the planned cuts in a message to employees of the unit. “The business can’t avoid this tough necessity,” he said in the communication, which was reviewed by Bloomberg News.

Shares of the St. Paul, Minnesota-based company rose 0.3% at 8:03 a.m. in early New York trading. 3M said Thursday that it will exchange about 15 million shares as it separates its food-safety business and combines it with Neogen Corp. 3M is down 30% this year, compared with a 17% loss for the S&P 500.

The scope of the workforce reduction couldn’t be immediately determined, but in the memo Vale said other parts of the company would see similar actions. 3M, which makes everything from dental adhesives to Post-it notes, employed about 95,000 people at the end of 2021, according to securities filings.

“3M is taking decisive actions to position the company for continued growth, while also adjusting to the challenging macroeconomic environment,” the company said in a statement, without being more specific. “As we prioritize our investments and resources, we will be adjusting on an ongoing basis the roles and responsibilities needed for future growth.”

The multinational manufacturer has underperformed in recent years amid supply-chain snags, currency fluctuations and rising costs. 3M said in July it will spin off its health-care operation, which accounted for almost a quarter of sales. Management also cut its full-year sales and profit outlook.

It also potentially faces billions of dollars in future costs tied to environmental liabilities and lawsuits alleging that it sold faulty combat earplugs to the US military that led to hearing damage. A bankruptcy judge last week rejected 3M’s attempt to use controversial bankruptcy rules to halt those claims, allowing them to proceed to trial. 3M has said it plans to appeal the ruling.

In an Aug. 28 note, Morgan Stanley analyst Joshua Pokrzywinski estimated 3M may face $14 billion in earplug-related liabilities “with potential for something higher.”

The company’s safety and industrial division plans to realign and reduce its structure, streamline its portfolio and rethink business processes, as well as eliminate jobs, according to the message. It is 3M’s largest business unit by revenue and accounted for 34% of its $35.4 billion in sales last year.

It also operates other divisions, selling a variety of products in the consumer, transportation and electronics markets.