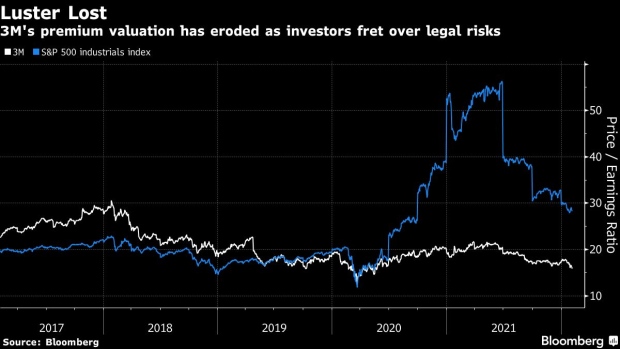 (Bloomberg) -- 3M Co., the maker of everything from Post-it notes to touchscreen displays, has a $33 billion problem hiding in plain sight.

It started as a trickle, with a single lawsuit filed back in 2018 alleging earplugs sold to the U.S. military were faulty. That first case unleashed a torrent. The company now faces several thousand suits over the issue and roughly 280,000 pending claims. That’s on top of another wave of litigation, with a cache of cases tied to its past production of so-called forever chemicals.

The thicket of legal woes looms large for Chief Executive Officer Mike Roman. 3M shares are worth 19% less than when he took the helm in July 2018, one of the worst performances in an S&P 500 index of industrial companies. Bloomberg Intelligence estimates that the stock’s valuation relative to its manufacturing peers implies a discount of about $33 billion tied to the legal battles.

The pain could get deeper. Steve Tusa, an analyst at JPMorgan Chase & Co., says potential costs related to the earplug litigation are still “currently underappreciated by investors.” CEO Roman and other 3M leaders on Monday will take on the arduous task of convincing shareholders to look beyond those challenges, as they offer the company’s financial outlook for the year and the first strategy update since it last set longer-term financial targets in 2018.

“You can talk about all the exciting things that you’re going to do, but this is the elephant in the room,” Joshua Aguilar, an analyst at Morningstar Investment Service, said in an interview. “I don’t think there’s a quick fix for their issues.”

In an emailed statement, 3M said it would “vigorously defend” itself in the earplug litigation and that it was working with authorities to fulfill its “commitment to compliance and environmental stewardship” in regards to the forever chemicals. The company also pointed to its “solid” performance in the last quarter of 2021 that capped a “strong year.”

The 3M brand is an iconic mainstay. The 120-year-old manufacturing giant’s consumer products like Scotch tape and Command hooks are daily staples, while its safety equipment and films are pervasive in commercial and industrial use.

Yet for all its omnipresence, the company hasn’t generated much excitement with investors in recent years. It hasn’t followed many industrial peers, most recently General Electric Co., that broke up their far-flung operations in the name of focus. And although it vastly expanded production as the world clamored for respirator masks during the pandemic, it hasn’t vaulted past peers in the subsequent industrial rebound.

Operational missteps, such as struggles to offset logistics and raw material costs pushed higher by inflation, haven’t helped. And although nobody could have predicted the pandemic and its disruptions, 3M has averaged 1.9% organic growth annually since 2019, well below its 3% to 5% target, according to RBC Capital Markets.

“We’re pleased with how effectively we managed the significant disruptions in the global supply chain and logistics to serve our customers,” the company said in a statement. “Overall demand remains strong in our end markets, and we’re well positioned for growth in large, attractive markets.”

Those growth prospects risk being clouded by the likely years-long process needed for 3M’s litigation battles to play out and threaten to keep the St. Paul, Minnesota-based company in limbo. Analysts doubt Roman and his lieutenants will use Monday’s presentation to provide a significant update on its legal liabilities.

A big part of the problem for 3M is that the scope of those legal risks has yet to come into clearer view. The earplug suits alone already stand as one of the largest mass torts in U.S. history.

The company faces more than 280,000 claims that it and a subsidiary supplied defective earplugs to U.S. combat troops that led to hearing loss and tinnitus. 3M said the earplugs, which it discontinued in 2015, are and have been safe and effective to use and that it will defend itself in the litigation.

3M has prevailed in five so-called bellwether trials. Meanwhile, service members have won six -- the most recent of which delivered an eye-popping result.

Two U.S. Army veterans in late January were each awarded $15 million in compensatory and $40 million in punitive damages, ballooning the sum of damages awarded so far to more than $160 million, according to lawyers for the plaintiffs. 3M has said it will appeal that verdict and others, and has already begun the process to overturn the first two plaintiff victories.

Five more test trials are scheduled through May, before the pace accelerates.

JPMorgan’s Tusa this month increased what he called a conservative estimate of 3M’s liabilities to a range of $2 billion to $185 billion, reflecting how thousands more claims are being moved to the court’s active docket for possible trial preparation.

For its part, 3M hasn’t reserved any funds to cover liabilities from the trials because “any such liability is not probable and reasonably estimable at this time,” according to a regulatory filing.

To be clear, it’s impossible to know what the cases may ultimately cost at this early stage, and the actual claims count may end up smaller than the 280,000 figure suggests. Juries must decide each of the tens of thousands of cases that could reach trial, and many could be dismissed. In addition to the 11 test trials so far, eight other bellwether cases were dismissed by the plaintiffs.

“We are not making a call on the expected payout here, but rather we are trying to provide an overview of a potential liability watch item that could be sizable,” Tusa said in a Feb. 4 note.

The earplug litigation comes on top of a web of lawsuits with individuals, states and water authorities tied to 3M’s past manufacturing of certain per- and polyfluoroalkyl chemicals, collectively known as PFAS. Settlements in those cases could total as much as $20 billion, according to Bloomberg Intelligence.

In its statement, 3M said it is managing PFAS proactively and is guided by science as it works with environmental regulators and others “to fulfill our ongoing commitment to compliance and environmental stewardship at our manufacturing operations.”

3M may lose its anticipated motion to dismiss suits over PFAS contamination from fire-fighting foam based on governmental immunity arguments, given disputes over the government’s knowledge may exist. If our liability estimate of $20 billion is paid over 20 years starting in 2024, the total payout may be about 9% of 2024 consensus Ebitda.

3M’s troubles extend beyond the courtroom.

In a statement, 3M said surging demand last year pushed raw material and logistics costs beyond its expectations and had to work through customer contractual obligations as it coordinated company-wide pricing actions. As the company offset inflation in dollar terms in the fourth quarter, it posted 9% organic sales growth in what it called a strong year amid a challenging environment.

The company must continue to stay ahead of those costs to show investors its operational stumbles are behind it, said Deane Dray, an analyst at RBC Capital Markets.

“It’s an ongoing battle, and so far they’ve shown lots of vulnerability,” Dray said in an interview. “One quarter does not mean that they’re out of the woods.”

3M’s profit margins could see a lift as supply chains normalize and it stays ahead of inflation. Melius Research analyst Scott Davis says the company needs to show its vast collection of business can capture strong demand.

“If it can’t grow in an up cycle, then it probably should not exist in its current conglomerate form,” Davis said in a Jan. 25 note.