Financial literacy month: Tips for millennials to get ahead financially

More than 40 per cent of Canada’s millennials have participated in "the gig economy" over the past five years, according to a study released Tuesday by the Angus Reid Institute (ARI).

While two-thirds of the survey’s respondents said they have never conducted work on a freelance or independently-contracted basis, the survey found that 42 per cent of males and 45 per cent of females aged 18-to-34 have done so since 2014.

Though the exact date range for the millennial generation is up for debate, it’s widely accepted to extend from those born in the early 1980s to as late as the early 2000s.

Nearly half of the respondents who said they “need” freelance and contract work were between the ages of 25 and 44. 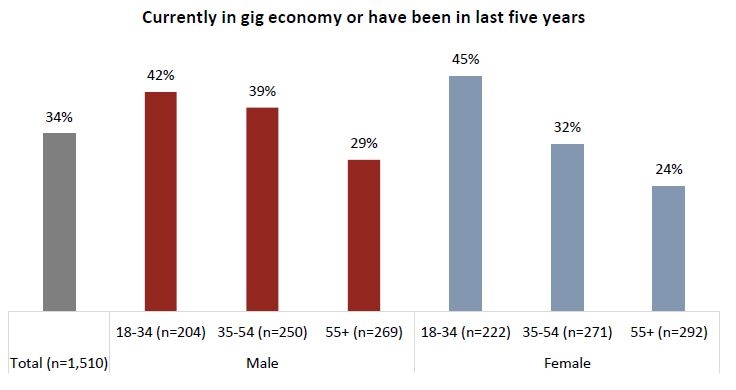 “People who participate in gig economy, they’re stringing together one or more of these informal jobs, tend to be people who have a much more unstable outlook about their own financial health a year out from now,” ARI’s executive director Shachi Kurl told BNN Bloomberg in a Tuesday interview. “They are not necessarily as confident as people who are working in a formal, stable employment situation.”

“For these folks, life and work is precarious on the financial front.”

The results found that participation in piecemeal employment was most prevalent for Canadians pulling in less than $50,000 annually.

However, in contrast to being largely fueled by Canadians in lower income-brackets, a large portion of the work being picked up across generations is not the traditionally thought-of “side hustles” such as driving a car with Uber or renting out a house on Airbnb, but instead is what ARI deems “white collar” work.

Among those getting by on informal employment, 36 per cent described their primary work as “office work,” including computer programming, graphic design and editing documents. Other popular types of work among respondents include personal assistant services, maintenance or handiwork, and babysitting or house-sitting.

“It is very much the push and pull, the teeter-totter between darkness and light,” Kurl told BNN Bloomberg. “On one hand, they like the gig economy because they say: ‘Hey, without it, I wouldn’t be able to make ends meet.’ ... But at the same time, they are alive to the fact that the hours are not great, the pay is not great, the security is not great.”

“I think that’s why you see Canadians not expressing a lot of consensus, or having a single point of view, on whether this is a good thing or bad thing for Canadian workers.”