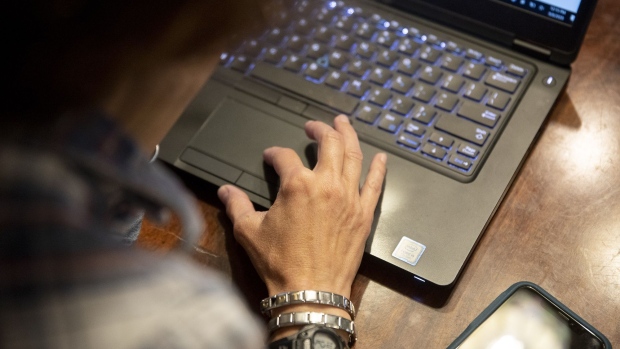 A person uses a laptop computer while working from home in an arranged photograph taken in Tiskilwa, Illinois, U.S., on Tuesday, Sept. 8, 2020. Coronavirus cases in the U.S. increased 0.4% as compared with the same time Monday to 6.32 million, according to data collected by Johns Hopkins University and Bloomberg News. Photographer: Daniel Acker/Bloomberg , Bloomberg

It alleges MindGeek did not end its partnership with GirlsDoPorn until that company's operators were indicted by U.S. authorities in 2019.

The lawsuit also claims that MindGeek-owned websites did not remove videos when requested by the women who appeared in them.

The lawsuit seeks more than US$40 million in damages. MindGeek did not immediately respond to a request for comment on Wednesday afternoon.

This story was produced with the financial assistance of the Facebook and Canadian Press News Fellowship.