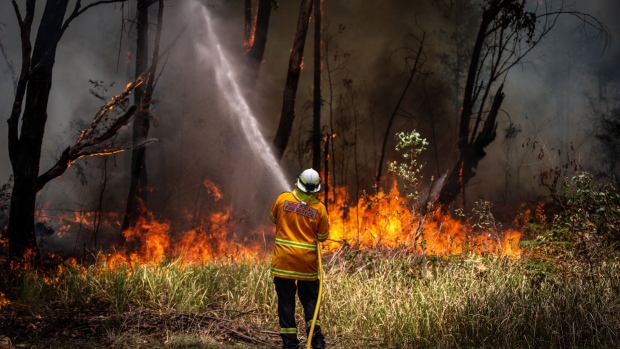 A New South Wales (NSW) Rural Fire Service volunteer douses a fire during back-burning operations in bushland near the town of Kulnura, New South Wales, Australia, on Thursday, Dec. 12, 2019. The smoke blanketing Sydney is a “public health emergency,” according to a coalition of Australian doctors and researchers who say climate change has helped fuel the wildfires that have produced unprecedented haze. Photographer: David Gray/Bloomberg , Bloomberg

(Bloomberg) -- A $41 billion pension fund being sued in Australia for failing to properly account for climate change in its investments has settled the lawsuit ahead of a three-day hearing Monday.

The Federal Court in Sydney was adjourned after Retail Employees Superannuation Trust and Mark McVeigh, a 25-year-old fund member who brought the action, reached a settlement. Details of the agreement were not revealed in court.

McVeigh brought the case in 2018 claiming Rest wasn’t doing enough to protect his retirement savings against the impact of rising world temperatures. The case was seen as a test of whether money managers have a fiduciary duty to help combat the ravages of a warmer planet.

“I congratulate the parties in reaching the accommodation they have reached, whatever it was,” Justice Nye Perram told the court.