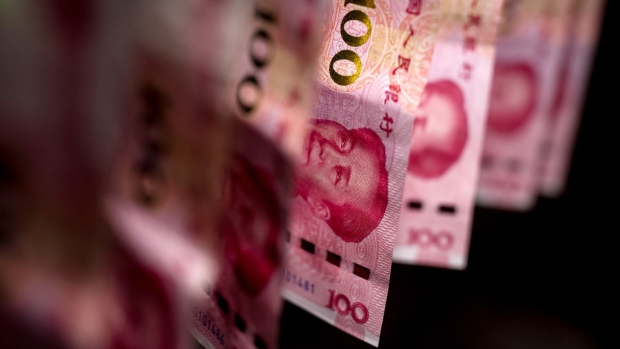 Chinese one-hundred yuan banknotes are arranged for a photograph in Hong Kong, China, on Monday, April 15, 2019. China's holdings of Treasury securities rose for a third month as the Asian nation took on more U.S. government debt amid the trade war between the world’s two biggest economies. , Bloomberg

Compared with the global market turmoil China’s currency devaluation in 2015 triggered, the more gentle but steady depreciation since is spurring less concern.

Five years ago to the day, the central bank unexpectedly cut its daily reference rate by 1.9 per cent, triggering the yuan’s biggest one-day drop since China ended a dual currency system in 1994. The shock move, and ensuing weakness, spurred outflows of more than US$500 billion over the next two years, prompting authorities to impose a series of restrictions to stem the exodus of funds.

Compared with the pre-devaluation level, the yuan is down more than 10 per cent against both the dollar and a basket of trading partner currencies. Against the euro, the Chinese currency is near a six-year low. Activity in the foreign-exchange market is calm: a gauge measuring expected swings in the yuan and an indicator for bearish options never reached the levels seen in the aftermath of Beijing’s shock move, although capital controls remain strict.

China welcomes a weaker currency, which makes the country’s goods more appealing globally. Yet avoiding sharp depreciation has meant a trade off between stability and encouraging the yuan to play a more significant role. The currency remains little used outside of China for the size of the economy. Its share in global payments and central bank reserves remains low at about 2 per cent, only a fraction of the dollar’s share of more than 40 per cent on both accounts.

Keeping depreciation slow may also help avoid the ire of U.S. President Donald Trump, who vowed to brand China a currency manipulator when he first campaigned for president. For now, it seems Chinese policy makers are happy to watch the yuan track the dollar weaker against peers. Despite escalating tensions between Washington and Beijing, the yuan is trading around the same level it was against the greenback six months ago.

“China’s management of the sentiment in the foreign-exchange market has been successful -- the overall stability in the yuan has helped bolster investor confidence and drive inflows,” said Carie Li, an economist at OCBC Wing Hang Bank. “In the future, Beijing will need to make the spot rate more market-driven, facilitate overseas funds’ investments in onshore assets, and create more derivatives for traders to hedge yuan risks.”

The People’s Bank of China can still dictate where it wants the yuan to trade with its daily fix. Based on quotes submitted by 14 banks every morning, the rate restricts the onshore yuan’s moves by 2 per cent on either side. For traders, the fixing signals the government’s stance on the currency. Other measures to manage the currency’s moves include rhetoric from officials, capital controls on companies and individuals and issuance of offshore yuan bills.

Such controls are a double-edged sword. While they help Beijing prevent messy depreciation, they also undermine the government’s plan to make the yuan a truly globalized currency. Despite China’s efforts to get the International Monetary Fund to name the yuan an official reserve currency in 2016, its share in central bank reserves is small. Analysts such as Dariusz Kowalczyk, senior emerging-markets strategist at Credit Agricole CIB, say the PBOC should allow the currency greater flexibility.

Further tests are coming for the yuan ahead of the U.S. presidential election. It posted its largest single-day plunge in four years in 2019 as the two countries exchanged threats to levy additional tariffs on each others’ exports. And in May this year, it edged closer to a decade-low after the Trump administration stepped up rhetoric against Beijing over its handling of the coronavirus. Analysts expect the exchange rate to end the year 0.4 per cent weaker at 7 per dollar, according to the median estimate in a Bloomberg survey.