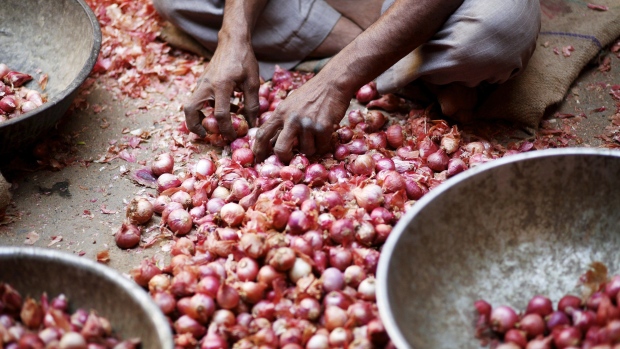 India will import 1,000 metric tons of onions and kept a ban on export of edible oils and lentils to cool prices, ahead of a report today that may show inflation accelerated last month. , Faseeh Mangi and Ismail Dilawar

Skyrocketing prices of tomatoes, potatoes and onions are putting food out of reach in flood-ravaged Pakistan and raising the specter of inflation hitting 30%, which may spur more monetary tightening.

The South Asian nation already reeling from dwindling currency reserves and the fastest inflation in almost five decades faces a food shortage after torrential rains submerged a third of the country and destroyed crops. Eight more districts were added at the weekend to the country’s calamity list of 80 areas hit by floods.

Onions were sold at 300 rupees ($1.37) a kilo from 50 rupees before the floods, according to Ali Asghar Londer, one of the thousands living in evacuation tents in Dadu, a city near the western bank of the Indus River. Dadu has seen the biggest damage to its rice and onion production.

The cost of potatoes has climbed four times to 100 rupees a kilo, tomatoes have gained 300% to 400 rupees a kilo, while ghee, a fat used for cooking, soared 400%, Londer said last week. Elsewhere, supplies of dairy and meat were also hit as warehouses got flooded.

The surge in food prices will add stress to an already fragile and politically divided economy that’s just been regaining some funding strength after securing a $1.16 billion International Monetary Fund bailout and $9 billion in pledges from Qatar, Saudi Arabia and the UAE.

The floods, which will cost an estimated $10 billion worth of damage, has claimed the lives of more than 1,300 people and forced half a million into camps. It’s also submerged large swathes of farmland and flushed away crops in a country where agriculture accounts for about a fifth of the economy.

In Sindh province, the entire cotton crop spanning 1.5 million acres, as well as 65% of the region’s rice output have been wiped out, according to Finance Minister Miftah Ismail. The entire production of dates, 20% of sugarcane and half of its onions and other vegetable crops have also been destroyed.

Still, Ismail was sanguine in an interview on Sept. 3, saying vegetable prices are coming off and that inflation at a 47-year-high is close to its peak and likely average at 15% this year. Analysts aren’t as optimistic.

“The main concern from the floods is the impact on inflation,” said Amreen Soorani, head of research at JS Global Capital Ltd. “Food shortage from floods the last time in 2010 almost doubled food inflation in two months. We’re already in a high inflationary environment, making the scenario even more difficult.”

Consumer price gains quickened to 27.26% in August, rising for a sixth straight month before the full impact of the flooding is felt. Food inflation, that makes up a third of the basket, climbed to 29.5% last month. The calculus doesn’t include yet the full impact of energy prices rising by 50%, a condition of the IMF loan.

Inflation could accelerate to 30% in the coming two months and that would take the average price gains this fiscal year to 23%-24%, surpassing the central bank’s estimate of 18%-20%, according to Fahad Rauf, head of research at Ismail Iqbal Securities Pvt.

Vegetable prices have started to ease in Karachi as imports arrive, Rauf said. Pakistan is purchasing onions and tomatoes from Iran and Afghanistan to plug the shortage.

Former Prime Minister Imran Khan, who was ousted in April yet remains very popular, is waging a fierce campaign to press for elections, and the devastating floods is stoking public anger.

“It’s been four days that our children are sitting on the road awaiting food and shelter. Our children are dying,” said Mohammad Sharif, 40, a protest leader who last week blocked one of the nation’s main highways for a few hours after not getting any relief goods. “We have no food, no tents, nothing.”

(Updates with comments from finance minister in seventh paragraph)