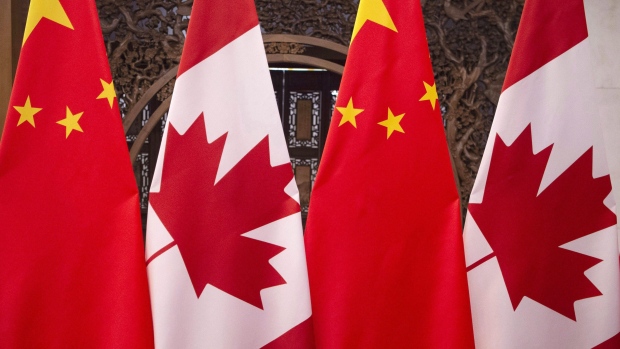 This Dec. 5, 2017 photo shows flags of Canada and China prior to a meeting of Canadian Prime Minister Justin Trudeau and Chinese President Xi Jinping at the Diaoyutai State Guesthouse in Beijing. The Canadian Press/AP/Fred Dufour

Beijing expressed “strong dissatisfaction” after 58 governments signed a declaration against detaining each others’ citizens for geopolitical leverage, a move seen as targeting countries like Iran and China.

“The Canadian side’s attempt to pressure China by using ‘Megaphone Diplomacy’ or ganging up is totally futile and will only head towards a dead end,” a spokesperson at the Chinese embassy in Canada said in a statement Tuesday. China “has lodged stern representations with the Canadian side,” the spokesperson said.

Canada led the initiative to push back against the use of arbitrary arrests as a diplomatic tool. China’s use of coercive diplomacy, including detentions and punitive trade measures, has increased sharply since 2018, according to a report released last year by the Australian Strategic Policy Institute.

“Today, a quarter of all countries, from all continents, come together to tell those who are being arbitrarily detained for diplomatic gain that they are not alone -- we stand with them,” Canadian Foreign Minister Marc Garneau said in an emailed statement. “This illegal and immoral practice puts citizens of all countries at risk and it undermines the rule of law. It is unacceptable and it must stop.”

In its response, the Chinese embassy dismissed Canada’s actions as “fact-distorting and ill-intentioned.” China has similarly called Meng’s extradition arbitrary and has said the cases of Kovrig and Spavor are being handled in accordance with Chinese law.

“This kind of act is no different from a thief shouting to catch a thief,” the spokesperson said. “How hypocritical and despicable!”

The announcement comes as relations between China and Western democracies continue to sour over everything from trade to the political crackdown in Hong Kong and the treatment of China’s Uighur Muslim minority.

“The practice of arbitrarily detaining individuals as leverage over another government is indefensible and the U.K. will not tolerate it,” said British Foreign Secretary Dominic Raab. “Depriving someone of their liberty with no legal basis violates fundamental human rights.”

--With assistance from Jing Li, Iain Marlow and Zoe Schneeweiss.