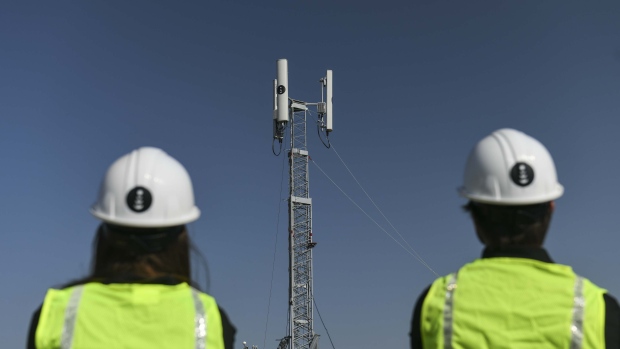 Bidding in a 5G airwaves auction in the U.S. surged past US$76.5 billion, fueled by a frenzied demand for capacity that could send carriers like Verizon Communications Inc. and AT&T Inc. to the debt market to finance the tab.

The auction run by the Federal Communications Commission started last month with a field of 57 potential bidders, including the third major wireless carrier, T-Mobile US Inc., and pay-TV providers such as Dish Network Corp., Comcast Corp. and Charter Communications Inc. Within days, the tally exceeded analysts’ estimates of US$47 billion.

“It blows all auctions away,” said Sasha Javid, chief operating officer of wireless data company BitPath. The previous top FCC airwaves auction attracted almost US$45 billion in bids in 2015. The current sale of frequencies in the so-called C-band could approach US$80 billion as bidding extends for another week or more, Javid said in an interview.

The go-for-broke bidding underscores how crucial these midband frequencies are to companies trying to seize global leadership in emerging 5G technology. The airwaves are expected to drive a yearslong surge of profits when deployed for next-generation mobile devices, autonomous vehicles, health-care equipment and manufacturing facilities.

“It’s great spectrum, there’s a lot of it, and it’s coming right as carriers are gearing up to get ready for 5G,” said Doug Brake, director of broadband and spectrum policy at the Information Technology & Innovation Foundation, a nonprofit research outfit.

While Verizon was expected to be the biggest bidder in the auction, the carrier may have run into a formidable counterbidder in T-Mobile, thanks to the financial backing of its controlling stockholder, Deutsche Telekom AG.

“If you’re Verizon and you don’t get this spectrum, you’ve basically lost the race to 5G,” Javid said.

With about US$10 billion in additional cash from Deutsche Telekom, New Street Research says T-Mobile could be using the auction to build on an already-large holding of midband 2.5-gigahertz airwaves gained with the takeover of Sprint Corp. in April.

T-Mobile already has “a powerful network advantage today, and they may extend it,” New Street Research analyst Jonathan Chaplin wrote in a note Monday.

Collectively, the largest bidders had about US$70 billion in cash available at the beginning of the auction. But with the total already higher than that, companies like Verizon, AT&T, T-Mobile, Dish and Comcast “may have to tap the bond market in early 2021,” Bloomberg Intelligence analyst Stephen Flynn wrote in a note Monday.

In addition to the airwaves licenses, winning bidders also will pay an estimated US$13 billion or more to current users of the airwaves, including satellite providers Intelsat SA and SES SA. The satellite companies will change their use of frequencies to make room for the 5G providers.