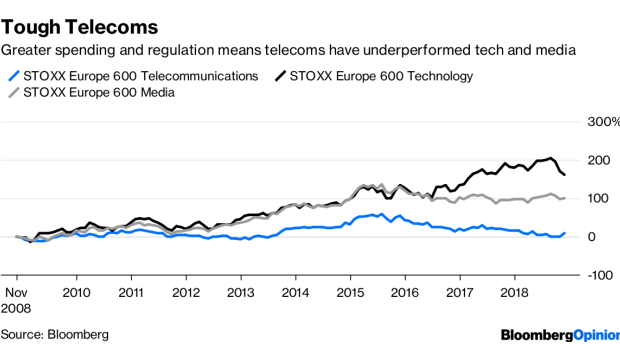 BT Group Plc will remove Huawei Technologies Co. Ltd. gear from the core of its 4G network, it said Wednesday, amid regulatory concerns on the Chinese firm’s place in critical infrastructure. That’s surely a cost the U.K. carrier could do without – but there’s potentially a way it could ease some of that pain.

The next generation of mobile networks, 5G, requires two main sets of spending: firstly, in auctions to acquire the rights to the spectrum; and secondly, to install new equipment to upgrade the network itself.

The spectrum auction has always presented a risk. Some governments (step forward, Italy) have been tempted to exploit the opportunity to plump up their treasury coffers by milking the process for every last cent.

Companies are now feeling the squeeze from this process. Though Vodafone Group Plc, for instance, estimates that spectrum costs average about 1.2 billion euros (US$1.4 billion) annually, this year it’s given itself 5 billion euros of headroom to pay for 5G rights. This is a significant share of its free cash flow, but it’s hard to avoid – because Europe is in the middle of its auctions carriers have to frontload their spending, and are wise to build in a buffer in case governments overcharge.

The U.K. has only completed part of its spectrum auction, as has France, while Germany will start its bidding process next year. A bevy of smaller markets such as the Netherlands is also coming up. That’s a lot of expenditure for carriers to contend with.

But now the pressure from governments not to use Huawei equipment means that the regulatory burden is extending into the second part of the 5G expansion: the network spending. So far, only the U.S., Australia and New Zealand have actively banned the Chinese firm's equipment. But the U.K., Germany and others increasingly look like they might do so as well. At the very least, it will be hard for carriers to secure lucrative government contracts if they are using Huawei gear that has been deemed insecure.

Huawei is much bigger in the market for telecom equipment than Nokia Oyj and Ericsson AB. Restricting its access to key markets would inevitably give the two Nordic firms greater market share – and greater power over pricing. Kicking out an important player could make it more expensive for carriers to build their 5G networks.

That might give them ammunition to push back against governments on spectrum prices. If regulators are driving up equipment costs by cutting out not just Huawei but also ZTE, they shouldn’t expect carriers to pay top dollar for spectrum as well, while also trying to encourage a fast rollout of 5G. Deutsche Telekom AG and Telefonica SA have already complained that the terms of next year's German 5G auction are uneconomical.

The argument may not convince governments as they structure their spectrum auctions, and frankly there’s no guarantee that it should. After all, it’s hard to quantify pricing for equipment that’s not yet available. But so long as officials squeeze Europe’s options for telecom equipment, carriers at least get a weapon with which to fight them on 5G auction charges.