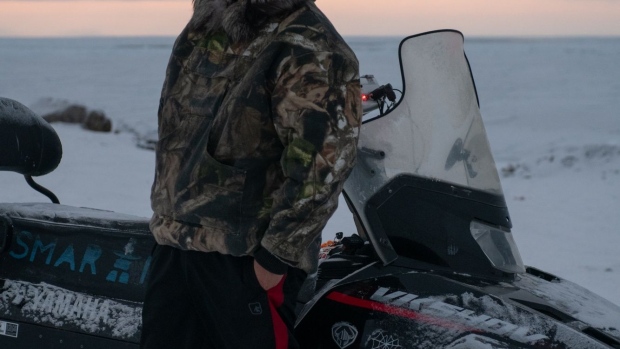 Solar panels on the roof of an apartment block in Bengaluru, India, on Monday, Feb. 21, 2022. Solar power, which has become the cheapest source of new power, is growing fast. India aims to install 175 gigawatts of renewable energy, three times the amount currently deployed in the U.K., in 2022. Photographer: Dhiraj Singh/Bloomberg , Bloomberg

(Bloomberg) -- With the 2022 Bloomberg Green Summit almost here, we decided to revisit some of the most effective leaders we’ve profiled in recent months. Some of them (Arreak, Baird, and Moore) are speaking at the summit; all are doing work that adds to our understanding of climate change or improves the odds that we’ll be able to lessen—and live with—its impacts.

Across the Arctic, warming is taking place at least twice as fast as in the rest of the world. Yet science in the Arctic has, until recently, tended to ignore those living on the front lines of change.

Andrew Arreak, an Inuit scientist and the operations lead with SmartICE, is taking part in a new wave of climate science informed by Inuit knowledge and perspective. SmartICE tracks changes in the ice in 32 communities across Canada’s north, including Arreak’s home village of Pond Inlet on Baffin Island.

When Arreak heads out on his snowmobile, towing an electromagnetic sensor, he’ll measure the thickness of ice as he travels, or stop to install a stationary “smart buoy” to transmit constant real-time data. A changing climate means people in his community can’t hunt or travel on the ice as early in the winter as they used to.

“I try and educate people,” says Arreak. “Climate is changing, and we have to be aware of what we’re doing, so we can enjoy what our grandparents have enjoyed, or our ancestors. Because there’s nothing else like it—being out there” on the ice.—Danielle Bochove

Otto is a climate scientist at Imperial College London and co-leader of World Weather Attribution, a research collaboration that quickly analyzes if or how climate change has made extreme weather somehow worse—more intense, more likely, or deadlier. It’s a small, nimble, and—because of a current lack of funding—mostly volunteer effort assembled to bust science out of the academic quad and let a curious public know when climate change affects them in the most direct and personal way. It’s also beginning to help courts answer the more pointed question: Who, specifically, is responsible?

WWA has run more than 40 analyses over the past several years, answering specific questions about climate change’s impact on weather with even more specific numbers. A South African drought in 2015-2016 was three times likelier because of the lack of rain. When Hurricane Harvey hit Texas in 2017, its rainfall was 15% more intense and about three times more likely to occur. Last year’s headline-grabbing Siberian heat wave? That was 600 times likelier in our new climate.

Otto is breaking ground in a scientific field that didn’t exist a decade ago, after taking an unusual route there—via a doctorate in philosophy.

Baird is the chief executive officer and founder of BlocPower, a climate tech company in New York committed to decarbonizing American cities by making buildings more energy efficient. Since its founding in 2014, BlocPower has retrofitted more than 1,000 buildings and says its customers typically see a reduction of 20% to 40% on their energy bills. Its goal is the greening of 125 million buildings across the U.S. And Baird aims to achieve that in an equitable and inclusive way, ensuring that poor communities get as much attention, and as many jobs, as wealthier areas.

“We really want to get into neglected, old, hard-to-reach buildings like the brownstone in Brooklyn where I grew up,” he says. “It was built a hundred years ago and didn’t even have a working heating system. There are millions of buildings like that across the country—older, financially underserved, and unable to afford green engineering.”—Sojourner Elleby

Whereas Baird focuses on multiunit buildings, Lauren Salz wants to ramp up the energy efficiency of detached homes. For American homeowners, weatherizing their dwelling to minimize energy loss and replacing fossil fuel furnaces and water heaters with electric heat pumps is expensive and can be a hard sell. That’s where Salz and the startup she co-founded, Sealed, come in.

To persuade owners to make such pricey but largely unseen improvements, Sealed finances weatherization and energy efficiency upgrades and coordinates contractors. Homeowners’ repayments are based on their energy savings. “If you don’t save energy, we don’t make money,” says Salz, a former investment analyst at McKinsey & Co. “We’re betting on big reductions in people’s energy usage so there’s a strong alignment of interest between us and the customer in recommending the right improvements and the best contractors.”

The company has amassed a database of different types of homes that have undergone upgrades over time. When Sealed signs up a customer, it conducts an energy audit and uses what Salz calls a predictive machine learning model to forecast the probable energy savings of improvements under various weather conditions.—Todd Woody

Shah is intimately familiar with the ups and downs of the clean tech industry. He founded SunEdison, a onetime solar giant that declared bankruptcy in 2016 (long after he left), and co-founded Generate, a clean energy financing company. Now he leads the U.S. Department of Energy’s little-known investment operation, the Loan Programs Office, which focuses on backing innovative clean technologies in early commercial development.

LPO was enormously influential about a decade ago, helping propel solar and electric vehicles, but the office then languished for a time. Given its existing loan authority—it has more than $40 billion to lend—LPO could become an more important tool in the fight against climate change if Congress isn’t able to pass the bulk of climate provisions in Democrats’ stalled Build Back Better legislation.

“When you think about the trillion-dollar impact we’ve had in solar and wind and in electric vehicles, I think people just take [LPO] for granted,” Shah says. “They’re like, ‘Well, of course they did. That was going to happen anyway.’ Really? Was it really going to happen anyway?”—Brian Eckhouse

In the Ferlo region of Senegal, climate change is making it harder for herders to find water for their cattle. In the Peruvian Amazon, indigenous tribes must remain alert at all times to chase off illegal loggers. In Los Angeles, city planners are struggling to figure out how best to plant 90,000 trees to help cool the hottest neighborhoods.

To solve these problems, all three groups rely on a little-known arm of Google that works closely with environmental advocates around the world.

Rebecca Moore runs the team of scientists behind Google Earth Engine, a vast trove of open source satellite imagery augmented with data-analysis software. The intent is “to allow scientists to easily analyze data and ask questions about how the climate is changing and answer in seconds or minutes instead of years,” Moore says.

The software engineer owes her almost two decades at Google to her penchant for advocacy. When the company hired her in 2005, she had recently made national news for using satellite mapping to scuttle a proposed logging project near her property in the Santa Cruz Mountains, south of San Francisco, that might have damaged a protected watershed.

Many of Earth Engine’s fans worry that Google might take it away or start charging academics and activists beyond their ability to pay. Moore says that won’t happen. But if it does, the pain would be widespread. Gilberto Câmara, an activist in Brazil who monitors the Amazon, says his field can be measured cleanly in terms of Moore’s work. “We break it down,” he says, “to before and after Google Earth Engine.”—Leslie Kaufman