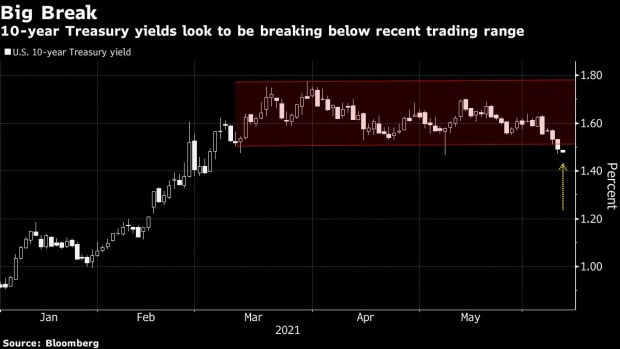 (Bloomberg) -- Treasuries traders are turning up their noses at the prospect of a higher-than-expected U.S. inflation number with benchmark yields breaking below their recent trading range amid a shakeout of short positions.

Preliminary open interest in 10-year bond futures -- a measure of outstanding positioning -- slumped by over 75,000 contracts on Wednesday, equivalent to almost $7 billion in 10-year cash bonds. Ten-year yields fell as much as six basis points to the lowest since March, in the process breaking below a tight trading range in place for about three months.

“Without a fundamental catalyst, we think the declines in yields over the last couple of sessions have been driven largely by technicals, especially given the breadth of short duration positioning,” JPMorgan Chase & Co. strategists including Jay Barry wrote in a note. The bank’s latest Treasury Client Survey taken on Monday showed bond positions were near their shortest since September 2018.

Key U.S. inflation data for May Thursday may provide the next catalyst for Treasuries, after last month’s report showed prices climbed in April by the most since 2008 on an annualized basis. As the global economic recovery continues to gain traction, a faster-than-expected reading could add to the case for the Federal Reserve to start discussions on withdrawing stimulus.

Bond yields in Asia have also reset lower. Australia’s 10-year yield dropped as much as nine basis points and fell back below 1.50% on Thursday, while Japan’s 30-year yield declined two basis points. Benchmark Treasury yields fell further in Asia, dropping one basis point to 1.48%, helped by a block buyer of 10-year notes.

“We’re seeing a covering of short positions and the market also appears to have really bought the dovish, patient line the Fed has been pushing on inflation,” Nomura Holdings Inc. strategist Andrew Ticehurst wrote in a note.

Ten-year bond yields in the U.S. and Australia may fall to 1% as investors gradually embrace the view that price pressures are transitory and unlikely to stay elevated in the medium to long term, said Hidehiro Joke, a senior bond strategist at Mizuho Securities Co.