When headline crude futures topped US$70 a barrel on Tuesday, it was just the latest landmark in a banner year for raw materials.

From copper to iron ore and oil, prices have rallied broadly in 2021, as the global economy emerges from the depths of the coronavirus pandemic and fires up demand. The Bloomberg Commodity Spot Index, which tracks a broad basket of raw materials, is up 21 per cent since January, putting it on track for the best year since 2016. 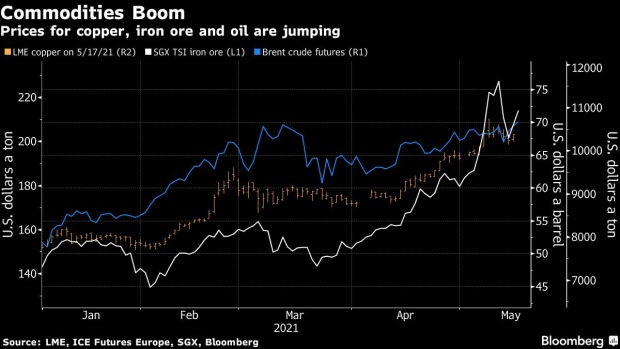 Copper surged to an all-time high this month, bursting through US$10,000 a ton in the process. Iron ore also hit a record recently with the steelmaking raw material surging as China churns out more of the alloy that ever. Now oil’s joining in, with Brent crude topping $70 a barrel, and retail gasoline prices above US$3 a gallon in the U.S.

Together, they’re latest signs of a global economy that is starting to see inflationary forces at work. The prices of the raw materials used to make everything from houses to coffee are skyrocketing, underscoring the giant reflation trade that has gripped global markets this year.

Beyond of raw materials, there are wider booms underway across commodity markets. Argentina’s government is limiting exports of beef, a staple in the country, to try to contain runaway inflation that’s approaching 50 per cent annually. Wheat, corn, and sugar all hit multiyear highs recently, while palm oil reached a record and soybean oil is trading near an all-time high.

Gold rose to the highest in more than three months, breaking out of a downtrend its held since August, on growing inflation concerns and assurances on monetary policy.

Copper has been one of the main beneficiaries of a broad economic recovery and vast stimulus programs around the world, but investors are also getting excited about the longer-term outlook.

The metal is crucial for nearly all the technologies and infrastructure needed to decarbonize the global economy with supply struggling to keep pace with consumption. A lack of mine investment and paucity of new projects has prompted forecasts of shortages.

There’s optimism among oil bulls that the crude market will keep running hot into the summer too. Continued restrictions on flying are likely to force people into their cars when they go on vacation, potentially proving to be a boon in road fuels demand. Meanwhile airlines are growing optimistic that some regions will be able to open their borders as vaccinations progress.

As a result big banks have rolled out a wealth of bullish takes on the sector. Goldman Sachs Group Inc. says a goldilocks scenario is forming for the commodities sector, with inflation starting to rise but monetary policy not yet tightening. Top trader Trafigura Group has talked up the prospects for copper to hit $15,000 a ton in the coming decade.