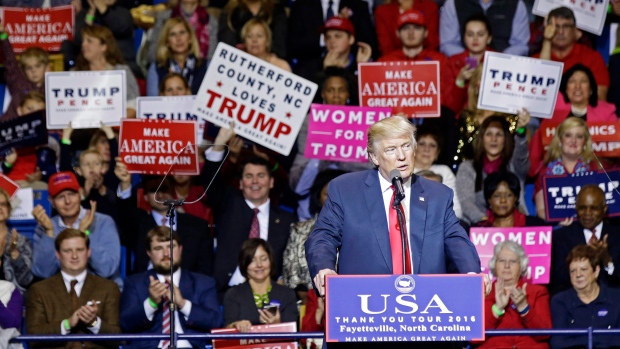 President-elect Donald Trump speaks to supporters during a rally in Fayetteville, N.C. , The Canadian Press

Canadian business executives are confident Donald Trump becoming the next President of the United States will boost the U.S. economy, the latest C-Suite Survey shows, yet they doubt whether he will be able to “Make America Great Again.”

Telephone interviews with 155 Canadians in leadership positions at the country’s largest 1,000 companies were conducted between mid-November and early December on behalf of KPMG. While the vast majority of respondents – 83 per cent – said the transition to a Republican Trump administration will have a positive impact on the U.S. economy over the next two years, executives were divided over whether the real estate mogul turned reality TV star turned Oval Office occupant really can make America’s future as bright as its past.

C-Suite leaders are split on whether America’s best days are ahead. What do you think?

Executives were much more optimistic about the future of their own country. More than two thirds of respondents – 69 per cent – either somewhat or strongly agreed with the statement “Canada’s best days are ahead”.

Such optimism, however, appears to be at least partially contingent on Canadian executives’ ability to do more business in the United States. Asked if the result of the U.S. election changed their short-term business strategy, 30 per cent of Canadian executives who said yes specified plans to “increase business and investment in the U.S.” That was by far the most popular response, more than doubling the 15 per cent of respondents citing more generic plans to prepare for growth.

Despite so many Canadian executives hoping to expand trade with the United States, they also acknowledge Trump is likely to make even the current Canada-U.S. trade relationship more difficult. Eighty-seven per cent of respondents said it was either somewhat or very likely Trump will attempt to renegotiate the North American Free Trade Agreement and a slim majority – 55 per cent – said the incoming American president was somewhat or very likely to increase tariffs on Canadian goods.

More broadly, 60 per cent of Canadian executives either somewhat or strongly agreed with the statement “Donald Trump’s Administration will likely lead to a decline in global trade levels.” Nearly two thirds – 65 per cent – said Trump will have an overall negative impact on Canada-U.S. trade over the next two years.

THE VIEW FROM WESTERN CANADA

It is on that point of concern where Canadian executives want a little help from the federal government. Asked what issues the Canadian government should be prioritizing in its relations with the Trump White House, “preserving free trade, tariff levels and market access” was most popular by a massive margin: 64 per cent of respondents chose that priority, comparing to 18 per cent selecting the second most popular option: “security”.