More than seven months after starting a bull market rally, Canada’s stock market has finally turned positive for the year.

The S&P/TSX Composite Index climbed 0.3 per cent on Monday in intraday trade, clawing its way back into the green for 2020. Earlier this year, the COVID-19 outbreak sent the index down 37 per cent. The Canadian benchmark rose above the 17,063.43 level on an intraday basis today as vaccine progress buoyed investor sentiment.

This has been a year for the history books. As quickly as the Canadian market plunged into bear-market territory in March, it surged even more rapidly into a bull zone as governments and central banks reacted with stimulus programs.

Since its March 23 bottom, the S&P/TSX Composite Index recouped about $893 billion (US$683 billion) in market value -- with plenty of bumps along the way.

Stock bulls have a lot to point to: promising vaccine results, the end of U.S. elections, signs of an economic recovery, better-than-expected quarterly profits and general corporate optimism that the worst of the crisis is over. 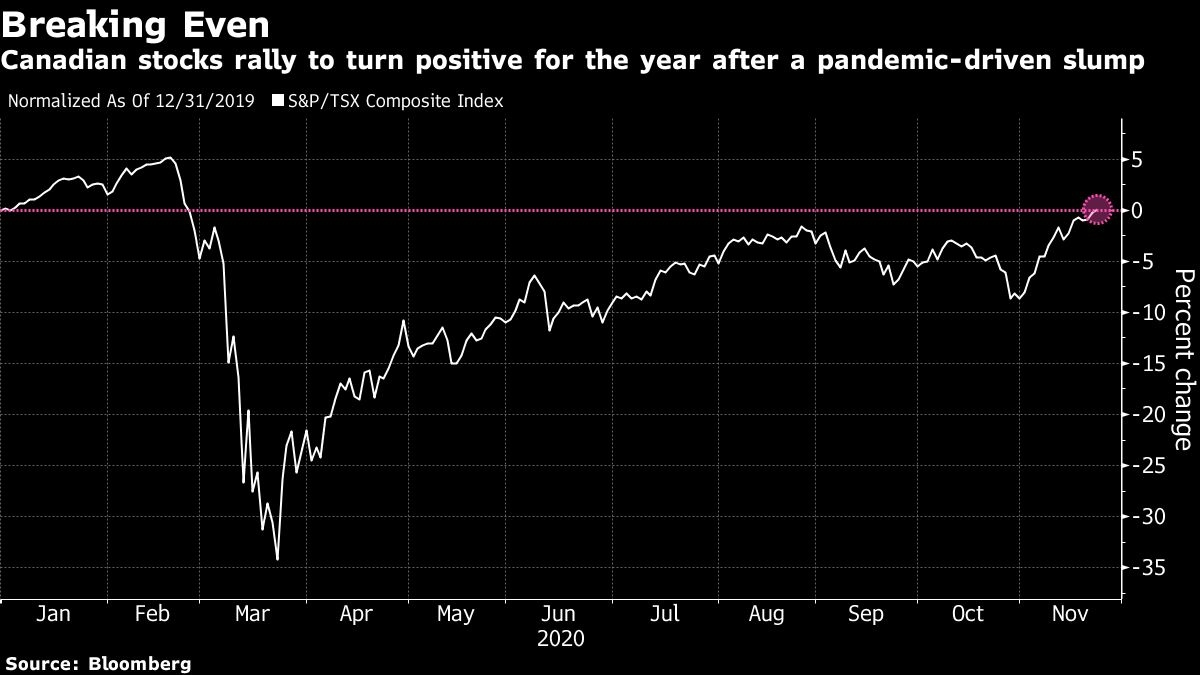 For the naysayers, fresh waves of virus cases around the world, including partial lockdowns in some major cities, means global growth could be painfully slow with international trade nowhere near where it was before COVID-19. Meanwhile, U.S. fiscal stimulus talks have stalled and getting a vaccine approved and delivered to Americans could take until spring or summer next year, at the earliest.

Put it all together and there are plenty of reasons to expect a bumpy ride. Canada’s stock market, laden with value plays, stands to gain a lot from an effective vaccine delivered next year. But it could still be volatile with the potential for a split House and Senate and no U.S. fiscal package in sight.

Here’s a look at what propped up Canada’s stock market and what held it back:

Despite a small weighting on the S&P/TSX Composite, tech stocks have been the best performers this year as investors sought companies that would do better in a scarred global economy where most people continue to work from home and more shop online.

Shopify Inc. has had a blistering run with its shares more than doubling as a flood of merchants focused on e-commerce during the coronavirus pandemic. That has made it the most valuable firm on the Toronto benchmark, surpassing the market stalwart Royal Bank of Canada. Supply chain software provider Kinaxis Inc. and network provider for the real estate industry Real Matters Inc. have also surged 80 per cent and 60 per cent respectively. 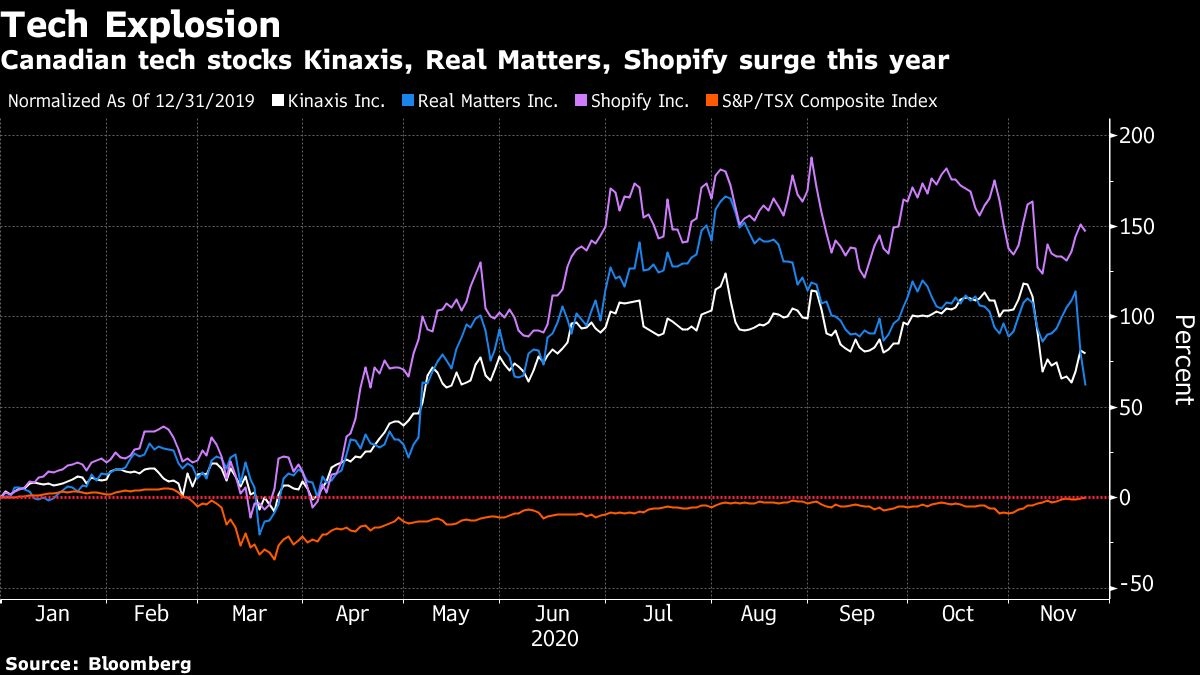 At almost 10 per cent of the Canadian benchmark, the tech sector’s impact is still small compared to the nation’s banks, miners and energy companies. So while its shares have surged this year, helping offset some losses on the benchmark, its epic rally hasn’t helped the TSX in the same manner that FAANG stocks have for the S&P 500, now up 11 per centso far this year.

Worsening virus projections and fears of a widening economic slowdown propelled the price of precious metals to record highs this year. In a pandemic-struck world, awash in stimulus from central banks and governments, the attraction of a hard asset that carries no counterparty risk proved difficult to ignore.

That helped the S&P/TSX Materials Index, home to more than 30 Canada-based precious metals miners, surge 15 per cent this year, making it the second-best performing group after tech. Making up 14 per cent of the broader Canadian benchmark, the group has even surpassed energy. It now has the second-biggest weighting in the benchmark -- a first since 2004, according to data compiled by Bloomberg. 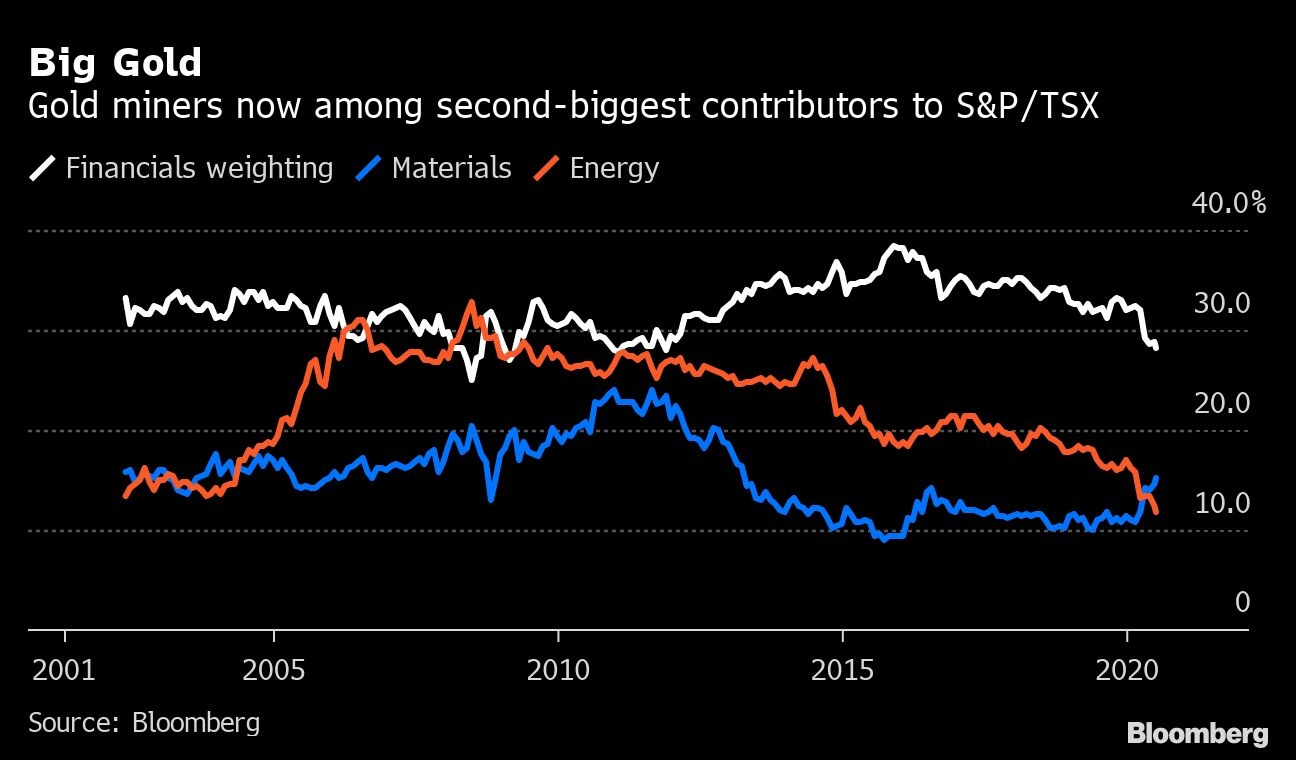 Investors have also been flooding back into exchange traded funds at levels not seen since the start of the COVID-19 pandemic. Equity funds have attracted net flows of $19.7 billion as of the end of October, making up 58% of total capital into Canadian ETFs this year, according to data compiled by National Bank of Canada. An influx of $22.4 billion in the first half of the year was more than double the amount in the same period last year.

Financial stocks, which include banks, insurers and asset managers, make up more than 30 per cent of the S&P/TSX Composite Index and have lagged the record-breaking comeback on the benchmark since the March-low. While the sector has reversed some of its losses amid optimism on vaccine progress, it’s still in the red this year.

The Big Six banks are slated to report in a couple of weeks and strong profit growth or an improving outlook for loan losses, which would suggest a solid economic recovery, could give the equity market another lift.