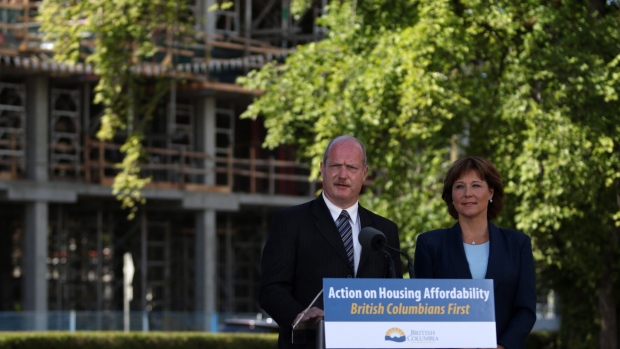 VANCOUVER -- An Angus Reid Institute online poll has found that most respondents support a tax on foreign buyers of Metro Vancouver homes but at the same time doubt how effective the move will be at cooling the region's red- hot real estate market.

Nine of every 10 people who responded to the poll conducted between July 26 and 28 say they support the new property transfer tax. But only six out of 10 believe the initiative will help improve access to the local market for local buyers and increase vacancies for renters.

The poll was released Thursday, the same day the British Columbia legislature passed a law introducing an additional 15- per-cent tax on homebuyers in Metro Vancouver who aren't either Canadian or a permanent resident. The new policy comes into effect Aug. 2.

“When I think about this tax, the first image that comes to mind is that whack-a-mole game,” said Frances Donald, senior economist at Manulife Asset Management, in an interview with BNN.  “My concern at this juncture is that we might be able to limit some foreign investment in the Vancouver region; but, actually, prices in the Fraser Valley are rising more quickly than they are in Vancouver on a year-over-year basis.  So are we simply pushing that foreign investment out into other areas in B.C., and maybe into other provinces?”

The provincial government has been facing increasing pressure to take action to address skyrocketing housing prices across the Lower Mainland, which encompasses Canada's most expensive real estate market. This move comes as British Columbians prepare to go to the polls in May 2017.

Despite Thursday's policy change, seven out of 10 respondents believe affected buyers will manage to find loopholes allowing them to get around the new tax.

Eight of 10 say the government should have intervened sooner to temper the ballooning housing market, including three quarters of those who voted for the incumbent B.C. Liberals in the 2013 election.

The poll found little difference between home owners and renters in terms of their support for both a foreign-buyers tax, as well as another provision that allows just the City of Vancouver to tax vacant properties.

The survey's respondents are part of the Angus Reid Forum, a 130,000-member panel of Canadians who participate in surveys and discussions. Angus Reid says the forum comprises of people in each major demographic group, and respondents receive a small monetary incentive -- from $1 to $5 -- for completing each survey.