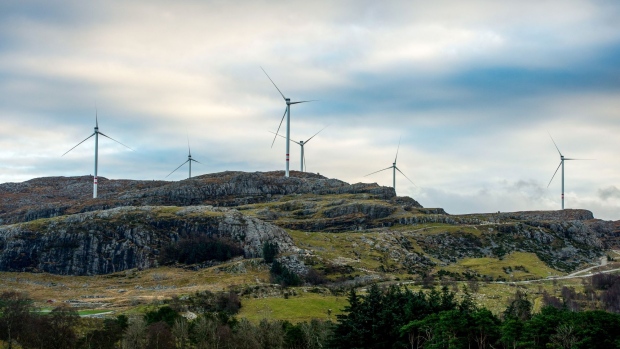 Onshore wind turbines in Sviland, Norway, on Friday, Dec. 11, 2020. Wind power could be a vital part of Norway's plan to slash pollution, but many voters have had enough of the machines that stand as tall as skyscrapers. Photographer: Carina Johansen/Bloomberg , Bloomberg

“We don’t have any plans to make any major changes there,” Trond Grande, the deputy chief executive of Norges Bank Investment Management, said in an interview on Thursday. “We have a special environmental mandate that has steered our investments and will continue to do so.”

The market for environmental, social and governance assets has seen a meteoric rise in recent years, as fund managers slap the ESG label onto a growing universe of products. Bloomberg Intelligence estimates the market will swell to $50 trillion by 2025, and “reshape global asset management.”

But the sudden rise of ESG has also raised questions over potential mispricing, especially as parts of the wider market get dragged into a correction. Tech stocks in particular, which often make their way into ESG funds, have suffered more than most with the S&P 500 Information Technology Sector Index down more than 10% this year. Clean energy stocks have also taken a hit.

For Norway’s wealth fund, its ESG strategy involves a screening process to test how companies perform on everything from water use, to biodiversity to children’s rights. The method is applied to its entire $1 trillion stock portfolio, which makes up just over 70% of the total assets under management.

The fund generated 14.5% in returns in 2021, its best performance in three years, thanks to its holdings of technology and financial stocks. Nicolai Tangen, the fund’s CEO, said it would be wrong to expect that performance level to continue given the interest-rate environment.

“From here on out, we’re going to see more rough weather.”

But in an interview with Bloomberg Television, Tangen underscored his commitment to ESG as a long-term strategy. Investing according to ESG principles “is clearly a plus,” he said.

“Perhaps in the old days there was a bit of a trade-off between ESG and returns,” he said. “Now I really think they go hand-in-hand.”

Tangen has previously likened the development in ESG investments to the dot-com bubble. Valuations got a “little high,” but after an adjustment, the overall market continued its ascent, he said last year.

Grande said the demand for assets that cater to ESG investors is even tied to the resurgence of inflation that’s led to a more hawkish Fed.

Assets that address climate change “require technology and basic materials and the kind of input factors that have been in short supply and around which there are supply-chain issues,” he said. “To an extent, there’s a correlation between ESG assets and the inflationary pressures we’re seeing.”