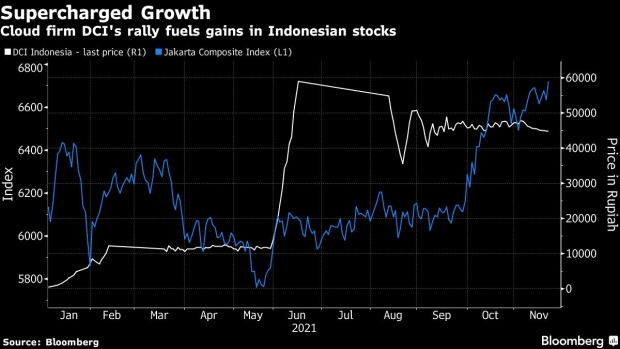 (Bloomberg) -- A cloud data service provider partly owned by an Indonesian tycoon has delivered the world’s best-performing initial public offering this year, jumping more than 100 fold since its share float in January.

PT DCI Indonesia has soared 10,852% since its 150 billion rupiah ($10.5 billion) listing on Jan. 6. That makes the firm the top gainer in Indonesia’s stock market and the second-biggest contributor to the Jakarta Composite Index’s 12% gain this year.

DCI’s stellar performance is another example of the frenzied trading in Indonesian technology stocks this year, with a key gauge of the sector having surged nearly four fold since its launch in late January. However, there’s caution about how much investors should read into it given the stock’s scant trading and lack of research coverage by brokerages.

“The data center industry is a beneficiary of the e-commerce and digital economy boom in Indonesia,” said Henry Wibowo, head of research at JP Morgan Sekuritas Indonesia. Wibowo said he doesn’t cover the company because “the stock is not liquid.”

DCI is 11% owned by Indonesian billionaire Anthoni Salim, whose business empire spans from food to telecommunications to real estate.

The stock’s sharp gains have triggered periodic trading suspension and an investigation by stock exchange officials into the firm for possible manipulation of transactions earlier this year.

The Indonesia Stock Exchange has completed the probe, the bourse’s transaction supervision and compliance director said in written response to queries from Bloomberg News earlier this week, without elaborating.

“Based on the results of the stock exchange inspection, there is no indication of any violations by the company,” DCI’s corporate secretary Nicholas Suharsono said in written response to questions from Bloomberg.