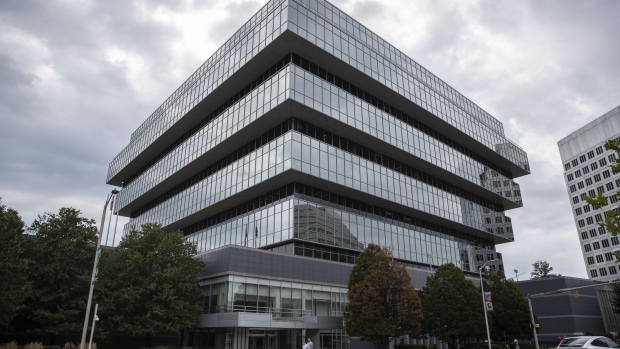 Pedestrians walk past Purdue Pharma LP headquarters stands in Stamford, Connecticut, U.S., on Monday, Sept. 16, 2019. Purdue Pharma filed for bankruptcy with a more than $10 billion plan to settle claims that it fueled the U.S. opioid epidemic by illegally pushing sales of its addictive OxyContin painkiller. , Bloomberg

(Bloomberg) -- A debate is raging in federal court over whether the owners of Purdue Pharma LP, members of the billionaire Sackler family, secured protection for themselves from future opioid lawsuits by abusing the U.S. bankruptcy system.

U.S. District Judge Colleen McMahon is worried about the answer and its implications for her upcoming ruling on an appeal of the drugmaker’s opioid settlement. The deal would route billions of dollars to opioid abatement efforts and see Purdue’s assets turned over to the states, cities and counties suing it over its role in the crisis.

Near the end of a daylong hearing last week, McMahon said she is concerned that Purdue’s owners might have abused the bankruptcy system and is considering sending the deal back to bankruptcy court for additional review.

Particularly troubling to McMahon is how aggressively Purdue’s owners siphoned cash out of the company after a 2007 guilty plea over the way it marketed OxyContin. Distributions skyrocketed to more than $10 billion -- though close to half went to taxes -- from 2008 to 2018, compared to about $1.3 billion in a more-than 10-year period preceding the plea.

That’s important because members of the family are receiving sweeping legal protection from future opioid lawsuits in exchange for a more-than $4 billion contribution to the settlement. The releases would even bar people who don’t agree to them -- including a handful of state attorneys general --from bringing civil suits against the family members over their role in the opioid crisis.

McMahon said Purdue’s owners may have “made themselves necessary” to the settlement by taking so much cash out of the company.

What Do The Sacklers Say?

The explanation for the uptick in cash transfers, according to lawyers for descendants of Mortimer Sackler and Raymond Sackler, is simple and in no way nefarious: Purdue started making a lot more money than it once did.

OxyContin was not immediately profitable when it was introduced in the 1990s, and the company lost its patent on the drug in 2004, crushing revenues. Then, in 2008, Purdue regained the OxyContin patent and sales soared  -- the company generated revenue of more than $2 billion in 2008 and for six years after that, compared to just $867 million in 2006, according to court papers.

“Nothing in the undisputed and extensive financial records suggests that any decisions about distributions were made as part of a secret plan to obtain leverage for releases in bankruptcy,” lawyers for the Mortimer wing of the family wrote in a brief. Despite the increase in transfers to its shareholders, Purdue had $1.36 billion of cash in hand as of its bankruptcy filing, or more than triple the amount it had in 2007.

What Do Dissenters Say?

A handful of U.S. attorneys general, including those of Connecticut, Delaware and Vermont, allege in court papers that those cash transfers are part of a long-term strategy by the members of the Sackler family to shield their wealth from opioid victims. They want Judge McMahon to reject the settlement.

The U.S. Trustee -- an arm of the Justice Department trying to overturn Purdue’s opioid settlement -- is less interested in an explanation for the transfers. In court papers, the agency calls the payments and the releases that the family members will receive under the plan “inherently abusive” and impermissible.

What Does The Company Say?

Lawyers for Purdue argue that abuse of the bankruptcy system is clearly defined by past cases and the releases to be granted to the Sacklers don’t fit the bill.

The releases may be “abusive” if the cooperation of the family members wasn’t necessary to the settlement, according to the company. But because the legal jeopardy that Purdue has found itself in is so closely intertwined with that of its owners, their help is needed to restructure in any meaningful way, the company’s lawyers argue. The alternative is liquidation, leaving creditors with very little.

McMahon has said she’ll try to render a decision at some point this week.

Representatives for members of Mortimer and Raymond Sackler wings of the family didn’t comment beyond court filings. One brother, Arthur Sackler, sold his shares in the company before OxyContin’s introduction.