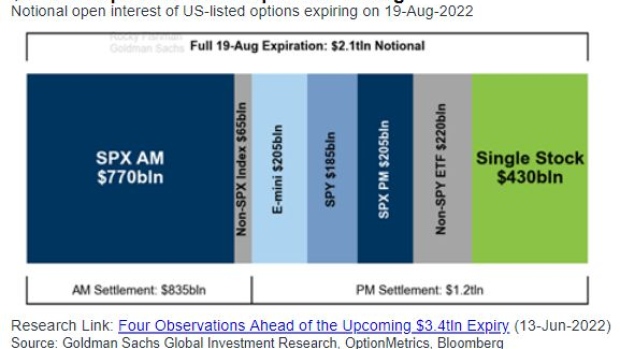 (Bloomberg) -- With August shaping up to be the calmest month this year for US stocks, traders are closely watching Friday’s $2 trillion options expiration for hints whether the tranquility will last.

At issue is the belief that derivatives markets have somehow played a key role in suppressing volatility, thereby compelling rules-based quant traders to buy shares and in turn luring a broader group of investors back into the market in order to chase gains.

After likely spurring an equity rebound during the summer lull, some strategists warn that this benign activity in the options market -- typically fueled by Wall Street dealers -- could disappear at a critical time.

From central bankers’ annual retreat in Jackson Hole, Wyoming, to pending data on inflation and employment, and the Federal Reserve’s policy announcement, the next few weeks are full of potential catalysts for market chaos.

“There are some technical reasons why as we go into the expiration this Friday, volatility could stay dampened and you could continue to see the market relatively supported,” Amy Wu Silverman, an equity derivatives strategist at RBC Capital Markets, said on Bloomberg TV. “As people return back from vacation with eyes on the ball, you can see what the real volumes are telling you about the volatility pickup.”

About $2 trillion of options are set to expire, obliging holders to either roll over existing positions or start new ones. The monthly event includes $975 billion of S&P 500-linked contracts and $430 billion of derivatives across single stocks scheduled to run out, according to estimates by Goldman Sachs Group Inc. strategist Rocky Fishman.

Stocks have restored roughly $7 trillion in values since mid-June, as what began as a short squeeze cascaded into a buying spree by those who exited equities during the first-half carnage amid fears that the Fed’s aggressive inflation-fighting campaign could tip the economy into a recession. Shares have since recovered as data showed a robust labor market and cooler-than-expected inflation.

Along the way, traders flocked to call options to catch up with the surprising rebound. In balancing their books, options dealers were stuck in “long gamma” positions that left them needing to go against the prevailing equity trend to maintain a neutral market exposure. Thanks in part to the process, peace returned in the market. The Cboe Volatility Index, or VIX, has averaged 21 in August, on course for its lowest level since November.

Broadly speaking, bullish contracts have been changing hands faster than bearish ones. The Cboe equity put-call ratio’s 10-day average hovered near a four-month low, a sign of growing interest in upside wagers.

Traders will try to push the S&P 500 toward 4,300 in order to get their options contracts to pay off, according to Brent Kochuba, founder of analytic service SpotGamma. Any failure to hit this threshold would suggest the latest rally is losing momentum, potentially inviting sellers. The index added 0.2% to close at 4,283.74 Thursday.

“Everyone is on the ‘call side’ of the boat,” said Kochuba.

Charlie McElligott, a cross-asset strategist at Nomura Securities International, expects Friday’s OpEx to open the door for bigger price swings after the buffer from dealer hedging is reduced. He sees potential for the market to move in either direction.

Should inflation come in hotter than expected and Fed policy makers ratchet up their hawkish rhetoric, that’d trigger turmoil across assets, he says. On the other hand, barring any negative macro shocks, money managers are under pressure to keep chasing the rally given their relatively low equity positioning.

“My daily communications with clients continues to ‘hate’ this rally who remain wrong-sided and a source of ‘buyers higher,’” he wrote in a note Wednesday.