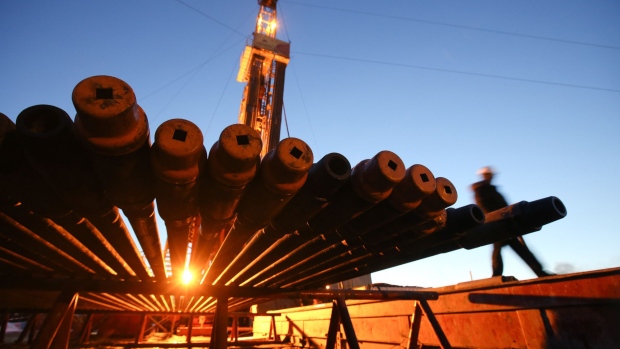 A worker passes an illuminated oil drilling rig and drill pipes, operated by Rosneft PJSC, in the Samotlor oilfield near Nizhnevartovsk, Russia, on Tuesday, March 21, 2017. Russia's largest oil field, so far past its prime that it now pumps almost 20 times more water than crude, could be on the verge of gushing profits again for Rosneft PJSC. , Bloomberg

(Bloomberg) -- A $20 billion fund in Denmark, MP Pension, is selling its stakes in the 10 biggest oil companies after deciding they haven’t done enough to live up to climate goals set out in the Paris accord.

The divestment, which represents a total of 644 million kroner ($95 million), means MP will no longer hold shares in ExxonMobil, BP, Chevron, PetroChina, Rosneft, Royal Dutch Shell, Sinopec, Total, Petrobras or Equinor, according to an emailed statement on Tuesday.

MP said it reached its conclusion on the stakes because “the companies are still working against more demanding climate regulation -- despite the companies’ public support for the Paris Agreement.” The fund said the four European majors on the list -- BP, Shell, Total and Equinor -- had made the most progress and were “showing signs of transitioning,” as opposed to the other six. But none of the 10 companies has a business model compatible with the Paris Agreement, it said.

The announcement comes as other major funds across the world review their holdings in oil and gas companies. The world’s biggest sovereign wealth fund, which is based in Norway, is in the process of significantly reducing its exposure to fossil fuels, albeit at a less ambitious pace than initially announced. Norway has also made clear its decision is based on risk considerations, given the economy’s exposure to its oil industry, rather than climate concerns.

MP, which is based outside Copenhagen, said it will assess over 1,000 oil companies before the end of 2020 as part of its goal of revamping its portfolio to be more focused on the climate. The divestments announced on Tuesday represent about two-thirds of MP’s stock holdings in oil, Anders Schelde, the fund’s head of investments, said.

To contact the reporters on this story: Mikael Holter in Oslo at mholter2@bloomberg.net;Christian Wienberg in Copenhagen at cwienberg@bloomberg.net