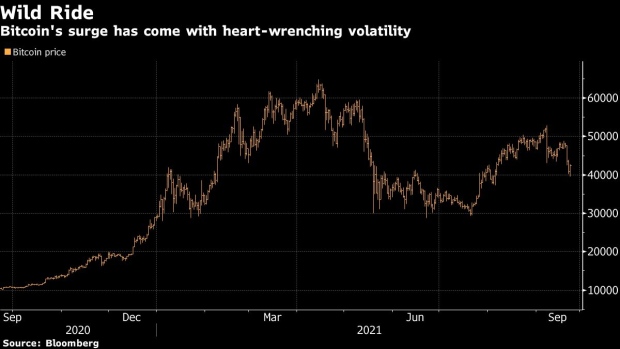 A quant hedge fund is launching active crypto-investing strategies in the U.S. with an ambitious pitch: Get exposure to the virtual-money boom with less of that crazy volatility.

Cambrian Asset Management is set to offer two trusts next month tied to Bitcoin and Ethereum respectively, it said in a Wednesday statement.

The $200 million firm based in Mill Valley, California, is among a growing slate of institutional money managers offering active trades for the crypto-curious. With executives from Winton Capital and Millennium Management, Cambrian has run a digital-asset fund over the past three years for clients.

Its flagship hedge fund, which trades some 50 assets from the virtual world with leverage, has returned 76% this year through August, according to a person familiar with the matter. That compares with an 108% gain in an index of the 10 largest cryptocurrencies and a 62% rise in Bitcoin.

Cambrian says that while it might not match every dizzying surge, it’s managed to cut the downside volatility of digital tokens by more than 70% versus going long outright with a passive bet. The firm’s systematic model dials exposures up and down based on market signals like price and volume.

The two trusts will both charge a 4% management fee -- roughly double that of the Grayscale Bitcoin Trust, the passive behemoth with around $28 billion in total assets. The firm says the two products will be the first of their kind for the industry.

“It’s for investors that want to have substantially more than just a passive approach, want to have an active approach, are cognizant of the downside and are prepared to pay higher fees,” according to Cambrian President Tony Fenner-Leitao, the former chief executive officer of Winton Capital.

Crypto demand has cooled somewhat with Bitcoin still down around 33% from its $65,000 peak in April. The Grayscale fund, which trades in the secondary market but cannot be redeemed directly, has maintained a discount to its net asset value from March onward. A U.S. regulatory crackdown of late has seen industry players threatened with lawsuits or cease-and-desist orders.

Unlike the Cambrian hedge fund, the two trusts will not go net short or use leverage, says CEO Martin Green. When the systematic model flashes bearish signals, the firm will reduce crypto exposures either by selling the underlying asset to raise cash or by using derivatives to hedge positions.

The firm plans to start secondary trading of the shares in about a year. The trusts are open directly to accredited investors that put in at least $50,000.

With policy makers still undecided on Bitcoin exchange-traded funds, a select few asset managers have launched trusts to offer crypto products for the broader public. There are now two tracking Bitcoin in the U.S. that are traded in the secondary market, both of which are passive, according to Bloomberg Intelligence. Unlike ETFs, shares in these trusts cannot be freely created and redeemed.

Like many systematic funds in stocks and cross-asset futures, Cambrian looks at market signals to divine trends. That’s helped it eke out crypto gains even in May, when Bitcoin plummeted 35%.

“Everybody likes the upside volatility but the downside volatility is the cost,” said Green. “It manifests itself in specific months when Bitcoin or Ethereum is down 20, 30, 40, 50% and investors in our strategies are not suffering that type of drawdown.”