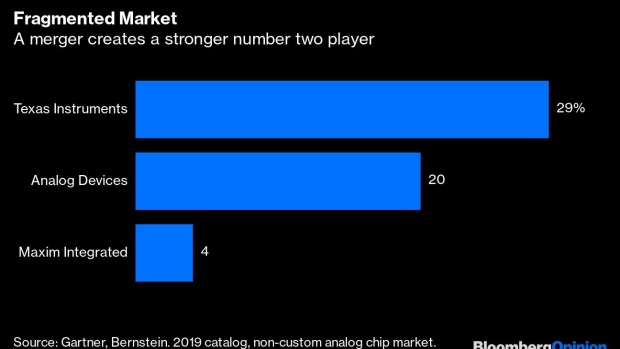 (Bloomberg Opinion) -- The boring part of the chip market is getting more interesting. For Texas Instruments Inc., that means stiffer competition from a stronger rival.

Early Monday, Analog Devices Inc. announced a definitive agreement to acquire Maxim Integrated Products Inc. for about $21 billion in an all-stock deal that works out to a 22% premium to Maxim’s close on Friday. Maxim shareholders will get 0.63 share of Analog stock for each share they own, resulting in 31% ownership of the combined company. The transaction is expected to be completed in the summer of 2021 and is subject to regulatory and shareholder approvals.

The deal would combine the No. 2 and No. 3 players in analog chips, one of the less sexy and more workaday corners of the semiconductor market. According to Bernstein, the category accounted for 13%, or about $54 billion, of the global $412 billion chip market last year. Analog chips have the specific function of converting physical world signal — including sound, temperature and pressure — into digital data. Compared to microprocessors — which are updated annually, cost up to hundreds of dollars per unit and require the latest bleeding-edge expensive chip manufacturing technologies — analog chips are very different. A typical analog product design can have a shelf life of many years, and they are inexpensive, often selling for less than a dollar each. And because they are also easier to make, they have high profit margins.

But there are downsides for this segment of late. Analog-chip companies have faced growth challenges and have under-performed as a result. Shares of Texas Instruments, Analog and Maxim have risen less than 5% this year through July 10, versus a double-digit gain for the Philadelphia Semiconductor Index. The main problem is analog’s end markets are broad-based and account for the “nuts and bolts” basic chips used in all industry sectors – such as automotive and industrial. As such, they are beholden more to general economic trends. Wall Street analysts estimate fiscal 2020 sales declines of 14%,  12% and 7% for Texas Instruments, Analog and Maxim, respectively. In contrast, analysts forecast Nvidia Corp. – which makes digital chips for the surging growth applications of gaming, cloud-computing and artificial intelligence – will generate 33% revenue growth this year. Investors have taken note, bidding up Nvidia’s stock price roughly 80% this year.

Given all that, it’s not surprising that a secondary player in the market such as Analog would feel compelled to do something to improve its fortunes. The classic consolidation playbook of  expense savings will have to do. The company said it will be able generate $275 million of cost synergies by the end of the second year following the deal’s close, adding the merger will be accretive to earnings within 18 months.

More importantly, ADI-Maxim would create a stronger No. 2 player in the “standard linear,” or non-customized, analog chip market behind Texas Instruments. The new merged company would get scale benefits to spread out its chip design expenditures to a larger revenue base, improving profitability. To illustrate the potential, Texas Instruments, which generates more than double the sales of its rival, spent just 11% of its revenue for research & development last year, versus 19% for Analog. Further, a combined company would have more pricing power with customers.

On a financial basis a deal makes sense. What about the regulatory risk? Amid the heightened political environment surrounding the technology industry, there will be some antitrust scrutiny. But as the deal would make a No. 2 player stronger, versus adding to Texas Instrument’s pole position, and because the end consumer likely won’t directly see price hikes, approval from Western regulators shouldn’t be difficult. The main barrier could be China. If geopolitical tensions between the U.S. and Asian country escalate in the coming months, the approval process for U.S. corporate deals may get arduous.

But except for that risk, shareholders in the two companies should rejoice over the prospect of this merger.