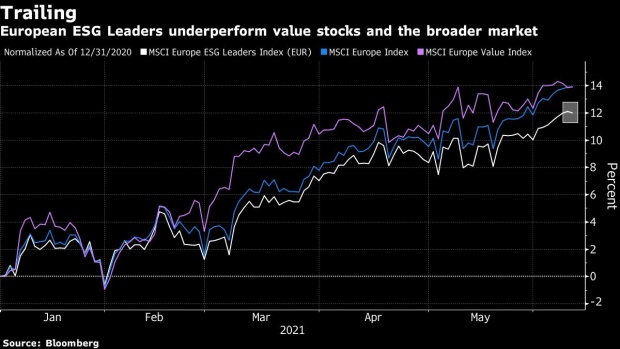 A bucket-wheel reclaimer stands next to a pile of coal at the Port of Newcastle in Newcastle, New South Wales, Australia, on Monday, Oct. 12, 2020. Prime Minister Scott Morrison warned last month that if power generators don't commit to building 1,000 megawatts of gas-fired generation capacity by April to replace a coal plant set to close in 2023, the pro fossil-fuel government would do so itself. Photographer: David Gray/Bloomberg , Bloomberg

Australia has a “particularly high-risk profile” when it comes to climate performance, said Peter van der Werf, the Dutch firm’s senior manager of engagement and active ownership. As global investors implement plans to decarbonize portfolios by mid-century, Australia’s lawmakers must follow suit, he said in an interview.

Cutting back on natural resources “are very hard decisions because these are obviously very important sources of revenue for the Australian economy,” Rotterdam-based van der Werf said. “That’s where in those conversations, institutional investors can also provide a perspective how they would foresee such a transition to take place.”

Unlike established asset manager groups like the Climate Action 100+ that pressure companies such as BHP Group Ltd. to bring their practices in line with the Paris Agreement, bond investors pushing governments to mitigate environmental, social and governance risks is a new concept.

“Aside from green and social bond investing, relatively few efforts have been directed towards helping sovereign debt investors actively contribute to advancing particular sustainable development objectives -- this is surprising,” since government bonds account for almost 70% of the $128 trillion global bond market, Robeco analysts wrote in a report this month.

Robeco was among firms with $7 trillion in combined assets that engaged Brazil’s government last year in a bid to reduce deforestation of the Amazon rainforest. The investor group is also targeting Indonesia over forestry.

“Sustainability was something you could sort of test and make a score card, but there was very little room to change that,” van der Werf said. Robeco’s bond managers are “very eager to get these conversations going,” he said.

Australia will be next on Robeco’s list to accelerate a so-called just transition as the firm seeks to decarbonize its stock and bond portfolios. The 176 billion euro ($213 billion) manager owned by Orix Corp. of Japan has already shunned Australian debt in its Paris-aligned bond fund, but still owns the debt in other funds. Australia is among the world’s largest per-capita carbon emitters.

Debt investors globally are grappling with assessing the long-term effects of rising world temperatures and how much economic growth must be sacrificed for countries to adapt. They’re also balancing client demands for cleaner, greener portfolios with a fiduciary duty to make money.

Australia may pay a price if it fails to take stronger action to curb greenhouse gas emissions. The nation may join others in default on its bonds by mid-century if strong policies aren’t introduced by decade’s end. That could lead to sudden or disruptive changes to its economy, according to research by FTSE Russell. About one-third of the economy and almost a quarter of the workforce are exposed to disruption if key trading nations source cleaner materials elsewhere as momentum to cut global carbon emissions accelerates, according to Deloitte Access Economics.

Australia is unlikely to be receptive to Robeco. Prime Minister Scott Morrison, who famously brandished a lump of coal in parliament, has steadfastly refused to commit to a deadline for net-zero emissions in support of politically sensitive industries like coal and gas. The nation instead is hoping technology such as carbon capture and storage will help meet its Paris Agreement obligations.

A spokesperson for Angus Taylor, Minister for Energy and Emissions Reduction, said Australia’s track record is better than many advanced economies, noting between 2005 and 2019 emissions fell faster than in Canada, New Zealand, Japan or the U.S.

“Action and outcomes are what matter, and our track record is one that will see Australia meet and beat our emissions reduction commitments while continuing to grow our economy and jobs,” the spokesperson said.

Robeco is looking for Australian institutional investors to help formulate the engagement plan to be put into action this year, van der Werf said. They’re “closer to the fire” with a “sharper view” of the opportunities to facilitate a transition, he said.

“You need to have a coalition of investors” to pressure all stakeholders that influence government policy, van der Werf said. “You can’t go at this alone.”