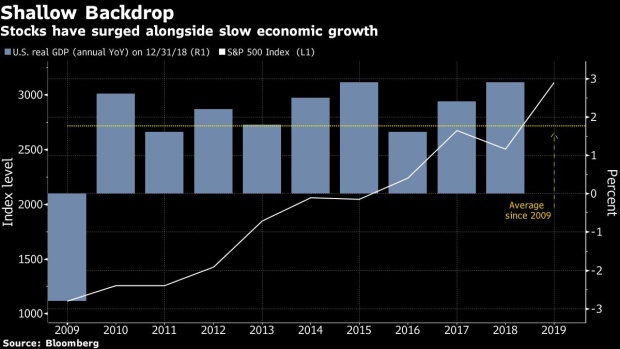 (Bloomberg) -- Terrified that shrinking forecasts for economic growth are sounding the death knell for equities? You wouldn’t be the first.

It’s more or less a bull-market tradition to peek at growth estimates right around Thanksgiving and declare the rally in stocks doomed. In the current version, the S&P 500 is up 24% ahead of a year in which gross domestic product isn’t expected to crack 2%. Divergences like that are symptoms of euphoria that investors always regret.

Right? Well, except for in 2012, when stocks rose 13% in the runup to a year in which the economy did no better than it’s expected to do in 2020. Oh and 2010, when pretty much the same thing occurred. In fact, the consensus prediction for 2020 GDP matches the average annual growth rate over the last decade, a period in which stocks surged sixfold.

Not that it couldn’t be different this time around. A lot could go wrong in the next 12 months. But anyone premising an investment thesis on anemic growth expectations should be aware that waiting for the economy to do a lot better than it’s supposed to in 2020 has been a recipe for missing $25 trillion of share appreciation.

“If you’re driving at 50 miles-an-hour and you slow to 30, you’re still going forward,” said Hank Smith, co-chief investment officer at Haverford Trust, which manages $9.5 billion. “That doesn’t mean you have to extrapolate that slowdown into negative territory. That’s what too many analysts are pundits are doing.”

With just weeks left in a banner year for equities, investors and analysts are marking up their playbooks for 2020. As usual, the fate of the American economy is a key point of contention, with some predicting a rebound and others arguing this year’s gains are predicated upon a a growth pick-up that won’t happen.

The average forecast in a Bloomberg survey of roughly 70 contributors holds that the U.S. economy will expand 1.8% next year. Sure, that’s the slowest annual rate of GDP growth since 2013, but it also matches the average of the bull market -- a period in which the S&P 500 has notched an annualized gain of 17.7%.

That isn’t stopping strategists at Societe Generale, Morgan Stanley, and UBS Group AG from predicting a slump in stocks, on expectations for slow economic growth or shrinking corporate profits. According to Lisa Shalett, the chief investment officer at Morgan Stanley Wealth Management, the correction could reach 15%, probably sometime in the first half of next year.

In her view, which reflects that of the firm’s chief U.S. equity strategist Mike Wilson, a lack of margin expansion for corporations is a key concern. Even if top line revenue expands 2% to 4% next year off of GDP growth of 2%, it’ll be very difficult for bottom line profits to grow at the near 10% rate that’s expected.

“Our caution is really that so much good news is priced into this market,” Shalett said by phone. “We have a market that is forecasting this rebound in GDP in 2020 and has consensus forecasts for S&P 500 earnings up 9 to 10%. From where we sit, it’s going to be very hard for companies in that kind of an environment to have profit growth of 10% when you’re looking at a labor market that is already tight.”

A perhaps more likely outcome is that slow growth will be enough to encourage single-digit equity gains next year, barring a re-escalation of the U.S.-China trade war or severe deterioration in economic data, Florian Regnery, cross-asset strategist at the firm, said in a message.

Haverford Trust’s Smith sees the possibility for the S&P 500 to deliver a total return of as much as 12% next year with the backdrop of a slight pickup in economic growth. Even if GDP growth stagnates below 2%, stock returns will still likely remain positive, he said, and subdued economic growth has its benefits.

“The advantages are that’s not enough to create excesses, and excesses are what kill economies,” Smith said by phone. “Excesses in inflation, excesses in inventories, excesses in misallocation of capital, excesses in employment. If you’re only growing 2%, it’s hard to create that.”

That’s part of the reason such a shallow economic expansion since the Global Financial Crisis has bred the longest one in history. With time passing by and the S&P 500 headed for the second best year of the bull market, some investors fear 2020 will be anything but spectacular.

Those concerns may be overdone, according to Bloomberg Intelligence. Since 1929, the S&P 500 has gained more than 20% in 23 separate years, and in the years that followed, returns were positive 70% of the time, BI data show. What’s more is the average return those years was 7.4%, greater than the benchmark’s long-term annual return.

“An object in motion stays in motion,” wrote equity strategists including Gina Martin Adams. “Historical experience suggests fears that stocks are doomed for a cooling-off period following the strong gain of 2019 may be overblown.”