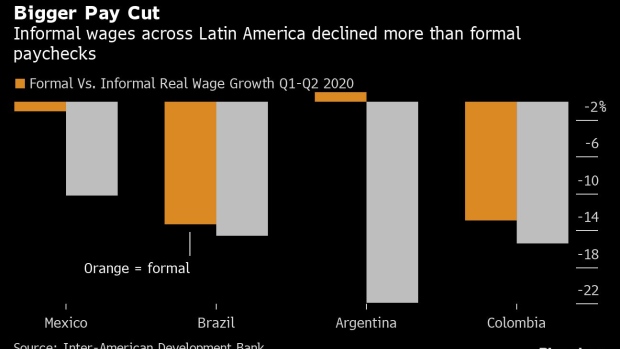 Juan Carlos Moyano and Mabel Alvarez stand for a portrait in front of their house in Benavidez (Buenos Aires), Argentina, on Friday, Jul. 23, 2021. Latin Americas job market is going deeper into the dark, with a surge of off-the-books employment trapping millions in an abyss of worse pay, unstable work and dependence on government aid. , Bloomberg

(Bloomberg) -- Of all the numbers that lay bare the pandemic plight of blue-collar workers, few are as jarring as the pay cut suffered by the millions of Argentines who toil in off-the-book jobs.

The decline for people like waiters, construction workers and candy-vendors was 36% on average last year, considering inflation. That staggering number is almost four times the average pay cut that Argentines in the formal economy had to absorb.

More Latin Americans are stuck in informal jobs every day, an explosive surge trapping millions in an abyss of unsteady work, poverty and dependence on aid from suddenly cash-strapped governments. About 7.6 million more people in the region, the equivalent of everyone in Bogota, will work informally this year than before the pandemic, according to the Inter-American Development Bank.

The worst recession in two centuries created double-digit unemployment, but the recovery is likely to cement disparity: Jobs “in the black,” as they are called in Spanish, are invisible to governments, don’t pay into social-security plans and workers have no unions to fight for them.

In Argentina, under-the-table work is recovering twice as fast as formal jobs after the pandemic and a government debt default. For Juan Carlos Moyano, that meant going from a 15-year salaried career as a security guard and maintenance manager to odd jobs around Buenos Aires that pay $1 an hour -- when work is available.

“When you’re working informally, you’ve got a job for today or tomorrow,” said Moyano, “but maybe in 20 days you don’t.”

Before the pandemic, roughly 140 million Latin Americans worked informally, or about 53% of the labor force. In last year’s second half, more than 60% of the new jobs in the biggest countries were informal, according to the UN-backed International Labor Organization.

Latin America has three times the level of all-cash labor than the U.S. or Europe, trailing only Sub-Saharan Africa. The pandemic took “a savage toll” on workers, Joana Silva, a World Bank senior economist, wrote in a recent report. “The losers lose a lot.”

“Each time there’s a crisis or recession, informality increases in a persistent way,” she said in an interview. “We’re seeing effects that last for a decade.”

Latin America’s recovery hinges on jobs that can be regulated. Indebted governments can’t afford stimulus programs, and must cut spending that ballooned amid the pandemic. Informal work creates weaker growth, lower tax revenue and social spending that translates into deficits, debt or inflation.

Argentine workers in the black saw the most significant wage declines in part due to 50% inflation, a chronic issue that neighboring countries resolved years ago.

Moyano, a 53-year-old with a seventh-grade education who lives in a Buenos Aires suburb, got dismissed in 2018 at the onset of Argentina’s recession. His salaried career had let him provide for his wife, Mabel, a public-school teacher.

Now he works one-off jobs, like unloading fruit crates at a market, which worsened arthritis in his knees. Mabel, already carrying most of the financial burden, had to cover his doctor visits.

“That’s one of the things that stings me most -- my wife works all year and I can’t take her to the beach for 10 days,” said Moyano, who makes about $200 a month through collecting unemployment and handyman work.

The World Bank found that Latin American wages are 23% lower for informal employees than for formal workers with the same qualifications and position. Informal wages declined more at the start of the pandemic than formal paychecks in Argentina, Brazil, Colombia and Mexico, according to the Inter-American Development Bank.

The crisis creates conflicts. Calls to Argentina’s domestic-abuse hotline rose 22% in this year’s first three months compared with a year ago, government data show. “Many people are feeling dejected and that creates more domestic violence,” said Sergio Moreno, who runs a job-training center for the poor in suburban Buenos Aires.

Jobs in the black exacerbate Latin America’s steep gender gap as well. In Peru, half of women in the informal sector -- domestic employees, hotel workers, waitresses -- lost their jobs in the first six months of last year. That’s 20 percentage points higher than Peruvian men working informally, according to the International Labor Organization.

From her Buenos Aires slum, Lidia Karina Perez sees a salaried job as a dream. She’s never had one.

Perez, who oversees a trash and recycling center, has repeatedly signed up for high-school classes that qualify her for welfare tied to education. She also started a textile-job training program in March. She dropped out of both, because she hated learning on a mobile phone, and she didn’t have space for sewing equipment at home.

She’ll sign up next semester regardless: Her job pays 14,000 pesos ($150) a month – half the minimum wage for Argentina’s federal employees. The welfare program is another 10,000 pesos.

Perez, who volunteers at a food kitchen to get free groceries, doubts she’ll get a salaried job at 47 without an education.

“I’d prefer to have a job than the handout,” Perez said. “I like the money I make, not what’s given to me for free, but you can’t live on 14,000 pesos. I struggle to see it happening for my generation.”

Amid the crisis, many of Latin America’s voters are backing leftists whose rhetoric centers on better work. Advisers to Peru’s President Pedro Castillo, who took office Wednesday promising to rewrite the constitution, say the country’s biggest problem is mass unemployment. Brazil and Colombia have leading candidates for next year’s votes who have attacked incumbents for failing to create quality employment.

“Informality changes the way individuals vote,” said Eduardo Levy Yeyati, a nonresident senior fellow at the Brookings Institution. “They lose hope for personal progress, and their expectations turn toward social aid, so they vote for different candidates.”

Politicians feed off popular fury, on the rise after many governments stopped emergency relief payments.

At Moreno’s job training center in Buenos Aires, Fundacion Oficios, dropouts mounted during the pandemic, with students crying over Zooms, angry that they couldn’t learn online. Some simply didn’t have the mobile phone data to carry on. Hardly anyone has gotten a formal position.

“The hopelessness that reigns right now makes most people stop looking for jobs and seek out subsistence,” Moreno said.