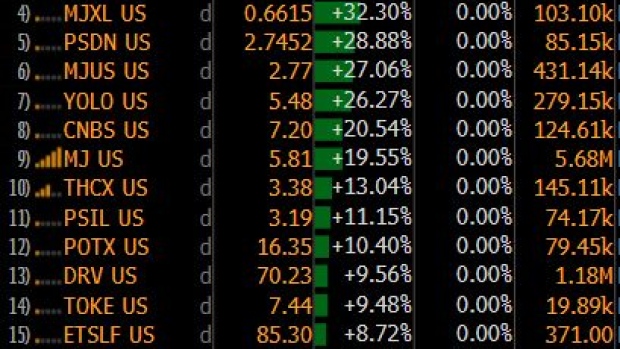 (Bloomberg) -- The biggest ETF that invests in cannabis companies just jumped 34% in under an hour after President Joe Biden took his first major steps toward decriminalizing marijuana.

The $505 million AdvisorShares Pure US Cannabis ETF (ticker MSOS) surged alongside other pot-related funds after senior administration officials said Biden will pardon everyone convicted of simple marijuana possession under federal law and is ordering a sweeping review of the drug’s treatment by law enforcement authorities.

The late-session news triggered broad advances across the sector, with cannabis-related funds dominating the top 10 biggest ETF gains for the day. MSOS’s young sister fund, the double-leveraged AdvisorShares MSOS 2X Daily ETF (MSOX) -- which only launched in August and has $1.4 million in assets -- rallied a staggering 70%.

“MSOS had the largest volume day in history and it all happened in the last 60 minutes of the day,” said Alon Rosin, Oppenheimer & Co.’s head of institutional equity derivatives. “Maybe it is game time finally ahead.”

Rosin said his team has been using bullish options to get exposure, a move that had been “painful up until the Biden headline.” Selling downside puts with a strike price at $10 and below “feels a lot more comfortable now too,” he added.