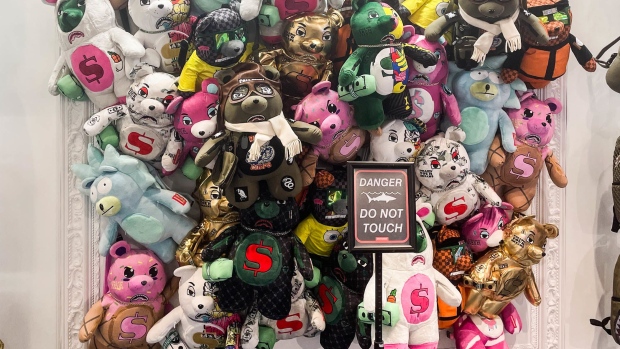 (Bloomberg) -- Just hours before 18-year-old Jordy Morales was planning to leave for training to become a Marine, he‘s at Sprayground’s pop-up shop in New York’s Times Square to pick up a limited-edition backpack.

Morales has put money from babysitting or handyman jobs toward a new backpack whenever he can. “I’d save up and try to get it as quickly as possible,” he says. Today, he’s holding a $120 backpack featuring a stitched collage of the brand’s top-selling designs. It’s on display as the final 10 of a 100-bag run.

On Aug. 14, cult backpack maker Sprayground opened its biggest pop-up shop ever in New York City. It features over 100 designs in its back-to-school collection, as well as more exclusive options featuring characters such as SpongeBob, Samurai Jack, and the Powerpuff Girls. The most recognizable ones have a shark mouth and eyes along the back and side, while some are shaped like teddy bears.

“I’m a backpack kid,” says Kyle Key, sporting a silver beard with his Sprayground backpack. “This ain’t no Jansport no more.” Over seven years, Key has collected 25 Sprayground backpacks, 16 of them shaped like teddy bears, as well as the brand’s jackets and face masks. “When I got my first one and was walking around in Philly, people were noticing it. My kids love to wear it to school and be different.”

He’d traveled from Philadelphia with some friends, including Myaia Fletcher, who has collected more than 100 Sprayground bags and estimates that she has spent more than $10,000 on them. Fletcher is now the brand’s official ambassador.

Located on 42nd street at Times Square, the pop-up shop has a time-travel theme, says founder David Ben-David. Scattered around the store are mannequins holding Sprayground bags as they run and break through walls. A shark head hangs above a mirror with human hands sticking out around its frame, and a crowned statue looks like a red astronaut. A giant T-Rex model with a belly full of backpacks was late for opening day, but arrived on Monday to take center stage.

“I want kids going back to school—and the grown-up traveling—to feel unique,” Ben-David says. “Everybody wants to feel that individuality, because they don’t want a bag that everybody else has. Everything we make is limited edition and never produced again. So I think that also is kind of our secret sauce.”

Ben-David first created Sprayground in 2010 to make bags more fun. It has become one of the most-searched backpack brands on Google. It has 100 stores in China, and new outlets are opening up in Sicily, Switzerland, and elsewhere in Europe.

There’s not yet a permanent store in the US, he says. But he’s thinking of opening a Sprayground museum to display artifacts from previous pop-up shops, as well as a gift shop that could serve as a permanent retail outlet.

A sixth-grader named Madison came with her parents after hearing about the bags from friends in dance class. “I saw the bag online, but it was sold out,” she says. “I was happy to find it here.”

The New York pop-up will be open until Sept. 5, followed by a runway show on on Sept. 8 during New York Fashion Week. The next pop-up shop is scheduled to open in Miami in December.