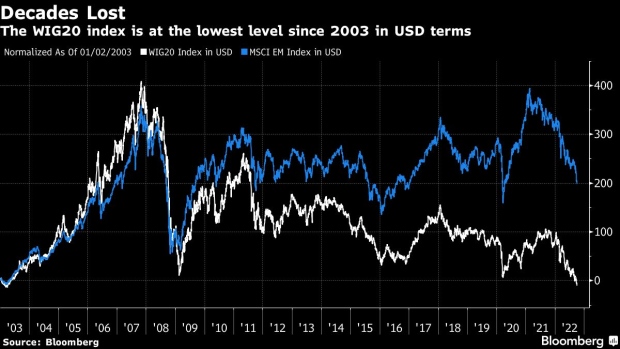 Pedestrians pass through a public space underneath an office building in the financial center of Warsaw, Poland on Tuesday, Aug. 16, 2022. Poland’s economy shrank more than expected in the second quarter, making a technical recession more likely according to analysts at mBank SA. Photographer: Bartek Sadowski/Bloomberg , Bloomberg

(Bloomberg) -- A bad year for Polish stock investors got even worse in the third quarter as economic prospects for the country affected by the war in neighboring Ukraine deteriorated further.

Warsaw’s WIG20 index lost 19% since the end of June, taking its year-to-date drop to 39%, the worst showing among 92 global equity gauges tracked by Bloomberg. The index slumped to the lowest level since the Covid pandemic in 2020, while in US dollar terms it’s trading at a 19-year low.

Sentiment turned against Warsaw-listed stocks after Russia’s invasion of Ukraine, which put the country on the frontier of a global conflict, and as the ensuing economic and energy crisis darkened growth prospects across the continent. Furthermore, the Polish government’s activism including mortgage payment holidays and plans for a windfall tax have spooked investors by massively jeopardizing company profits.

Even the country’s coal-linked stocks, which benefited from spiking energy prices and scarcity of the fossil fuel earlier in the year, slumped during the third quarter amid uncertainty over which companies will face taxes on their additional profit.

“Even as valuations of Polish companies are already low, we lack any impulse that could reverse negative trends,” said Grzegorz Zawada, head of PKO Bank Polski SA’s brokerage unit. “It’s hard to expect sudden inflows from abroad, as foreign investors are still concerned about geopolitical risks and impact from inflation on Polish economy.”

Computer game producer CD Projekt SA is the only WIG20 stock to advance in the third quarter on hopes that a Netflix Inc. series may revive interest in its Cyberpunk 2077 franchise. Improved sentiment toward the industry leader has also helped other gaming stocks rise, including Huuuge Inc. and CI Games SA.